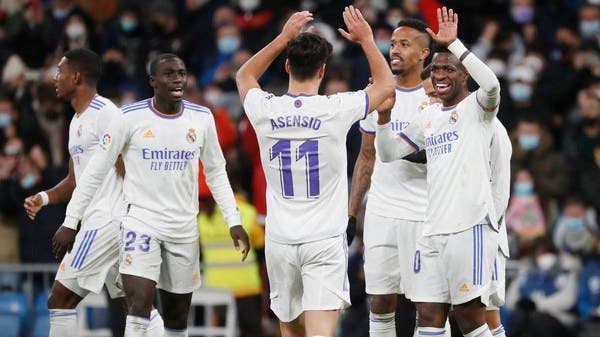 Real Madrid consolidated its position at the top of the Spanish League by defeating its guest Valencia 4-1 on Saturday in the 20th round.

And at the Santiago Bernabeu, Real Madrid regained its balance after losing the last round at Getafe with a 1-0 goal.

The Royal Club succeeded in recording its fifteenth victory, compared to four draws and two defeats, to take a new step towards the 34th title of his career in the Spanish League.

Real Madrid raised its lead to 49 points from 21 games, eight points ahead of its closest rivals, Seville, who played 19 games, and Valencia’s balance stopped at 28 points in ninth place.

Real Madrid owes this victory to its two French stars, Karim Benzema and Vinicius Junior, who scored the four goals with two goals each.

The first half ended with Real progressing with a goal scored by Benzema in the 43rd minute from a penalty kick that the team got as a result of a foul by Omar Al-Direti against Casemiro.

Just seven minutes after the start of the second half, Vinicius added the second goal for Real after a break of individual skills, ending it with a powerful shot with his right foot into the net.

Vinicius returned and scored the third goal for the royal club and the second for him in the 61st minute with a header after Marco Asensio’s cross, Valencia goalkeeper Jasper Silesin failed to address it.

Goncalo Guedes responded with a goal for the visitors in the 76th minute from a follow-up to the penalty kick that he had carried out by himself and was kept away by Real Madrid goalkeeper Thibaut Courtois.

Two minutes before the end, Benzema scored the fourth goal for Real and the second with a powerful shot with his right foot, taking advantage of Ferland Mendy’s pass.