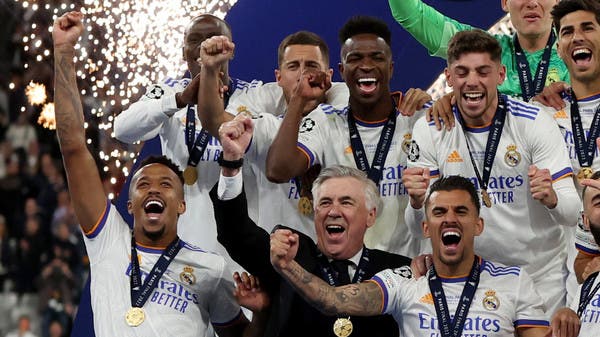 Real Madrid crowned himself the absolute “king” of the European Champions League after winning the title for the fourteenth time in its history, by beating Liverpool 1-0 in the final on Saturday at the Stade de France in Paris.

After making French Zinedine Zidane the coach with the most titles in succession (three times between 2016 and 2018), Real gave his new old coach Carlo Ancelotti the achievement of being the first coach to win the title four times in the history of the competition in its previous and current versions, after he had previously crowned it. With Milan (2003 and 2007) and with the Royal Club in particular (2014) in his previous passage.

After the match, the Italian said, “I can’t believe it. We had a great season. We played well. It was a difficult match and we suffered a lot, especially in the first half. In the end, I think we deserved to win this competition.”

On winning the title for the fourth time, he continued, “I am a record man. I was lucky to come back here last year and have a great season. I think we have overcome difficult matches. The fans helped us a lot in the last match. They helped us a lot tonight.”

Real owes its record number of titles and renewal of its victory over Liverpool, who lost the 2018 final against the Spanish team 1-3 in Kyiv, to the Brazilian Vinicius Junior, who scored in the 59th minute the only goal in the meeting, whose start was delayed for 36 minutes, due to “security problems” associated with With “late arrival for fans” and fake tickets, according to “UEFA”.

Vinicius Junior was not the only hero in the Parisian suburb of Saint-Denis, but Belgian goalkeeper Thibaut Courtois played a key role in his brilliance in the face of Liverpool’s attempts, especially the Egyptian Mohamed Salah, who was looking for revenge against the Royal Club after he was denied the completion of the meeting in front of him in 2018 due to a shoulder injury that caused By Sergio Ramos.

“In the press conference, I said that when Real Madrid plays finals, they win. I said that because of the good history,” Courtois said.

“I needed to win a final for my career, for the effort I put in, to be respected because I think I wasn’t respected as it should have been, especially in England. I read a lot of criticism even from a great season.”

“I am very happy and proud of the team’s performance. We beat the best teams in the world. Manchester City and Liverpool were amazing this season. Liverpool played a great game but we got one chance and scored from it.”

Real, who also crowned the local league title, deprived his English rival of his seventh title in the continental competition and achieving the treble, to be satisfied with the titles of the two local cup competitions, after he dreamed of a historic quartet before Manchester City robbed him of winning the local league in the last stage by a point, and then the Royal Club win on Saturday.

Despite the criticism directed at him at the beginning of his second adventure in the “Santiago Bernabeu”, Ancelotti succeeded in leading the royal club to add the Champions League title to the League title after an exceptional journey in the continental competition in which he and his players imposed themselves “kings” of returning from afar after they were close to exit In the quarter-finals and semi-finals against France’s Paris Saint-Germain, the defending champion Chelsea, and the latter’s citizen, Manchester City, before returning and resolving the qualification in the deadly time.

And in the fourth final match between two coaches who previously won the title, after 2007 (Ancelotti with Milan and Spaniard Rafael Benites with Liverpool in particular), 2010 (Portuguese Jose Mourinho with Inter and Dutchman Louis van Gaal with Bayern Munich) and 2011 (Spain Josep Guardiola with Barcelona and Scottish Alex Ferguson). With Manchester United, Ancelotti defeated German Jurgen Klopp, who won the title with the “reds” in 2019, and became the best coach in the history of the competition in terms of titles, after he was the first coach to enter the final four times.

Liverpool started the meeting pressing, but without any chances until the 16th minute, when Salah was close to opening the scoring for the English team after a cross from Alexander-Arnold, but Courtois had him on the lookout and then repeated the matter seconds later in the face of the Egyptian scorer.

And amid Real’s inability to get out of its area, Liverpool continued its pressure and was close again to the net if Courtois had not intervened with the help of the left post to block Mane’s shot (21).

After he came out unscathed from the attacking tide of Liverpool, Real began to move towards the “Reds” area, but without a risk to the Brazilian goalkeeper Alisson, who was not tested on any occasion, amid the inability of Ancelotti’s men to shoot even towards the goal for once with reaching the last five minutes. for the first run.

And when the half was breathing its last, Real thought that he kidnapped the goal of the advance through Benzema, following a fray in the area between Alisson, Konate and Fabinho, after a cross from the Frenchman, who returned the ball to him to hit the net, but the referee, after a prolonged scrutiny by “VAR”, canceled it for reasons Offside, although the ball reached him from Fabinho’s knee.

Similar to the first half, the second Liverpool began pressing, but without effectiveness again in front of Courtois goal, so they paid the price in the 59th minute when Casemiro started with a counter-attack, after which the ball reached Valverde, who penetrated on the right side, and he played it cross to reach the far post of Vinicius Junior, who deposited it in the net.

Salah was close to equalizing with a shot from the outskirts of the area, which Courtois starred in blocking it (64), then he repeated the matter a few minutes later by closing the corner in front of Al-Masry (69).

Real knew how to keep the goal despite the attempts of Klopp’s men, thanks to Courtois, who starred twice in the face of Salah and prevented Al-Masry from equalizing, to lead his team to safety and ultimately devote himself to the “king” of the continental competition.