Real Madrid is in the lead temporarily.. Granada crushed with a harsh result 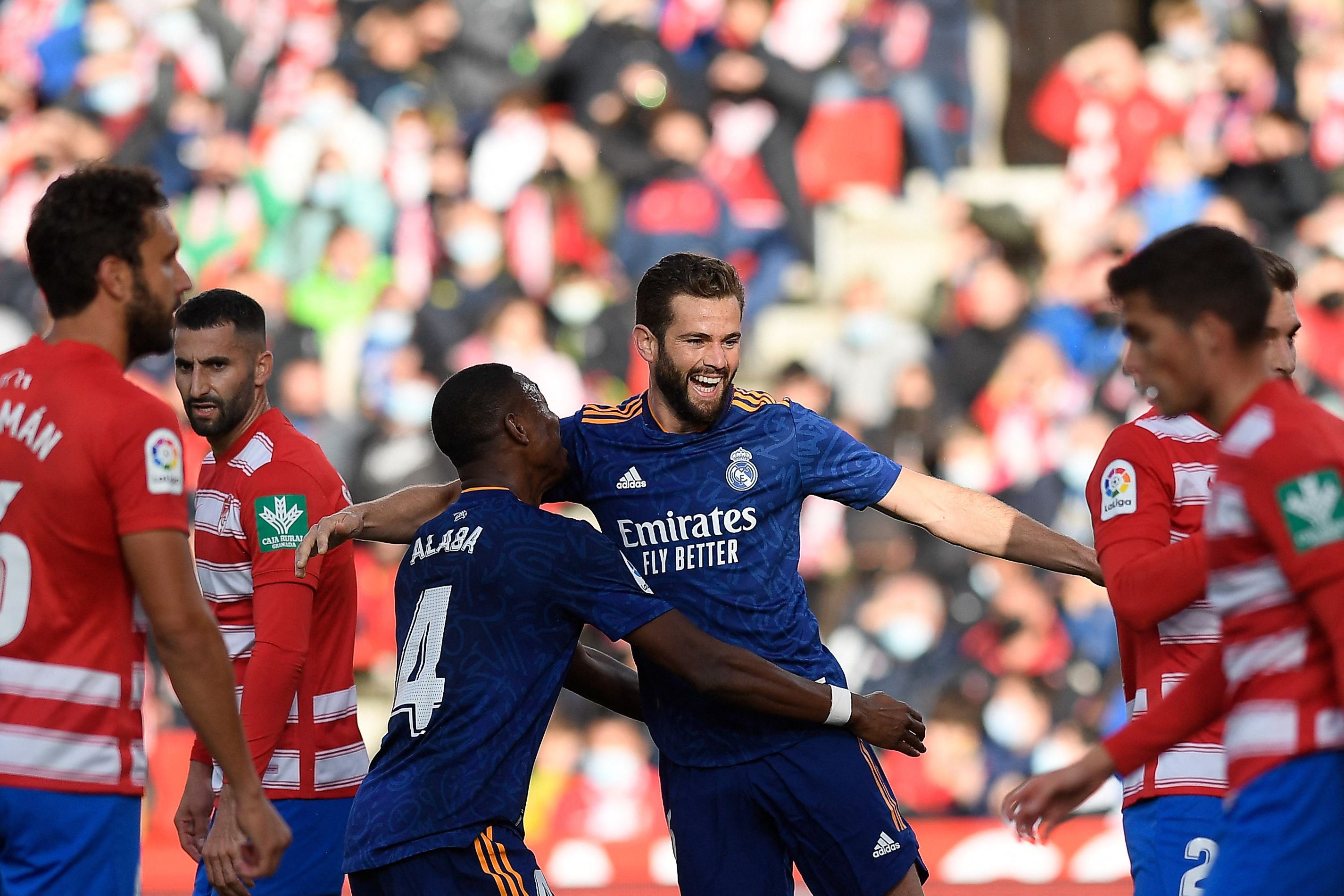 Real Madrid took the lead temporarily by beating its host Granada 4-1, on Sunday, in the fourteenth stage of the Spanish Football Championship.
Marco Asensio (19), Nacho Fernandes (25), Brazilian Vinicius Junior (56) and French Ferland Mendy (76) scored the goals of the Royal Club, and Colombian Luis Soares (34) scored the honorary goal for Granada.
This is the third consecutive win for Real Madrid and the fourth in its last five matches, specifically since its first loss this season, which was against its host Espanyol 1-2 on the third of last October, and the ninth this season.
Real Madrid raised its score to 30 points, two points ahead of its former partner in second place, and its guest in the next stage next Sunday, Seville, which fell into a draw against its guest Deportivo Alaves 2-2 on Saturday, and Real Sociedad, which hosts Valencia later.
Real Madrid has a postponed match from the ninth stage against its guest Athletic Bilbao, which it will play on the first of next December, before its trip to Sociedad to face its local team on the fourth of it.
Italian coach Carlo Ancelotti’s men confirmed their good readiness to face their host Sheriff Terpsol of Moldavia next Wednesday in the fifth penultimate round of the Champions League, as they seek to rehabilitate their 1-2 loss against him at the “Santiago Bernabeu” on September 28.
Asensio gave Real Madrid the lead when he took advantage of a superb ball from German Toni Kroos in the first quarter from the middle of the hosts’ stadium, so he quickly moved and penetrated into the area before he followed it with his right to the right of Portuguese goalkeeper Luis Maximiano (19).
Real Madrid consolidated its progress after a corner kick that crossed and exchanged it with Croatian international Luka Modric before the German passed it crawling inside the area, followed by Nacho with his right from close range, hitting the crossbar and hugging the net (35).
Granada reduced the difference through Suarez with a powerful shot from outside the area, hitting Nacho’s foot and deceiving Belgian international goalkeeper Thibaut Courtois (34).
Real Madrid consolidated its progress with a wonderful third goal after a coordinated attack led by Brazilian international midfielder Casemiro with a pass to French international striker Karim Benzema, who started from the right and penetrated into the area before passing it to the unattended Modric, who in turn prepared it on a plate for Vinicius, who easily followed it inside Empty goal (56).
It was Vinicius’ eighth goal this season, so he was ranked second on the scorers list, two goals behind his colleague Benzema.
Granada suffered a painful blow by sending off midfielder Moncho Rodrigues in the 67th minute after a strong intervention on Vinicius in a decision that did not suit coach Robert Moreno, who protested strongly against the referee, and in turn, he received a red card.
French international defender Mendy added the fourth goal when he received a ball behind the defense from Casemiro, so he penetrated into the area and hit it with his right to the left of goalkeeper Maximiano (76).
Akram Getafe and his guest, Cadiz, scored 4-0, alternating between Uruguayan Matias Oliveira Miramontes (7), Jorge Cuenca (60), Turkish Enis Onal (81) and Jaime Mata (90 + 4).
It is Getafe’s second win this season, and it got rid of last place after raising its score to nine points, two points ahead of Levante, who had tied with its guest Athletic Bilbao on Friday at the opening stage.
Later, Elche also plays with Real Betis.
The stage concludes on Monday with the meeting of Rayo Vallecano with Real Mallorca.