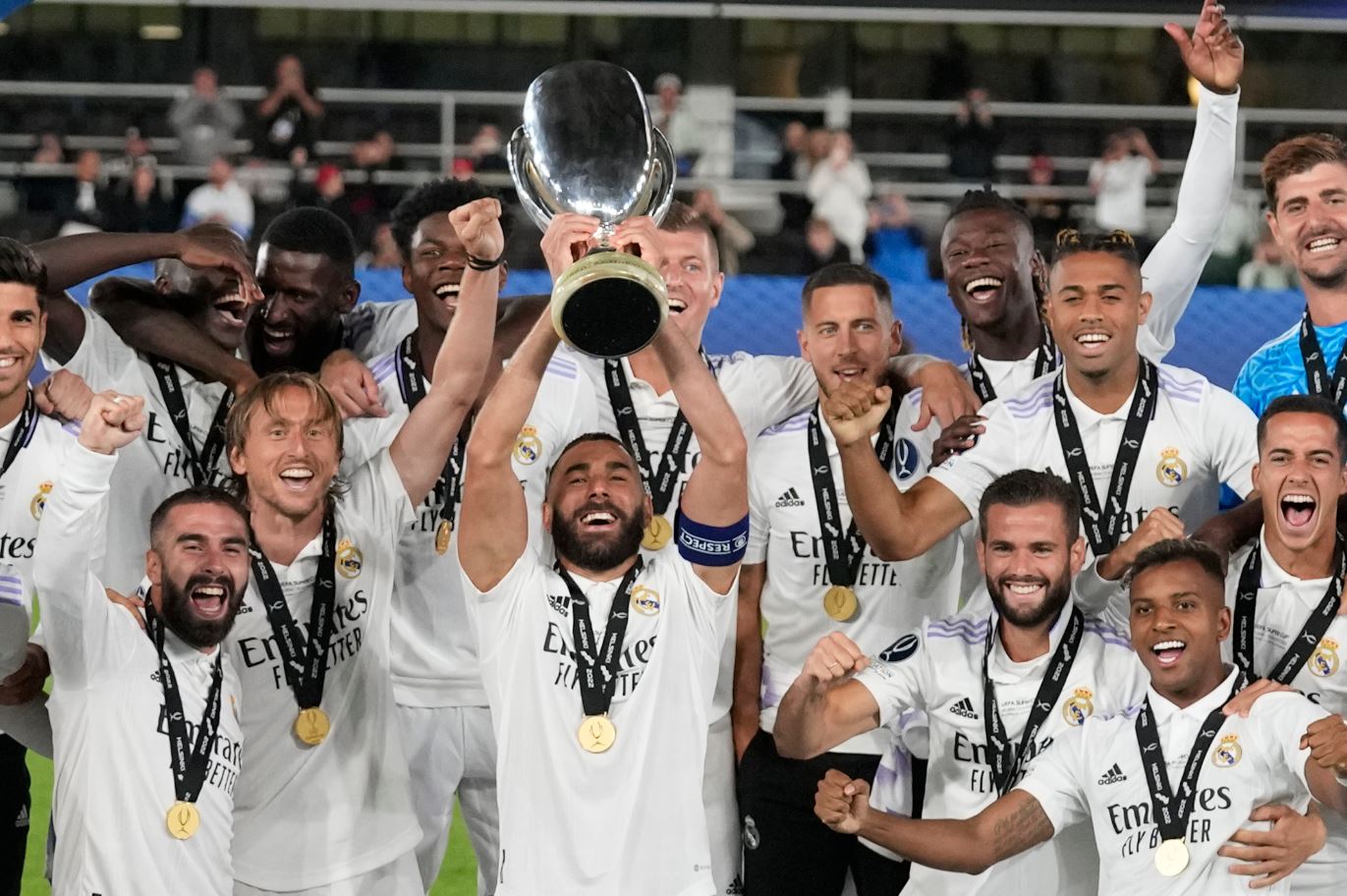 Real Madrid and its Italian coach Carlo Ancelotti added a new record to their record by winning the European Super Cup after beating Eintracht Frankfurt 2-0 yesterday in Helsinki. Real owes this crown, which he added to his titles in 2002, 2014, 2016 and 2017, to the Austrian David Alaba and the French Karim Benzema, who scored the two goals in the 37th and 65th minutes, respectively. With this, Real reached the 21st European title, including 14 in the Champions, five in the Super, and also two European League titles.

And after becoming the first coach to win the Champions League four times in May, Ancelotti became the only coach to win the Continental Super Cup for the fourth time as well, with the record he shared with Pep Guardiola. Ancelotti had previously won the Super Cup with the Royal Club in his first pass in 2014, and before that with Milan in 2003 and 2007.

The Helsinki match was the first confrontation between Real and Frankfurt, winner last season of the “Europa League” at the expense of the Scottish Rangers to win his first continental title in 42 years, since their famous meeting in the Champions League final in 1960 at Hampden Park in Glasgow, which ended with an exhibition victory. Real Madrid 7-3 to win the title for the fifth time in a row.
Unlike Real, who starts his local campaign at the end of this week, the Frankfurt season started two weeks ago, with his participation in the first round of the German Cup, before playing his first match in the “Bundesliga”, where he fell in front of the champion of the past ten seasons Bayern Munich 1-6.

After a beautiful shot by Vinicius Junior, goalkeeper Kevin Trapp turned it into a corner, Real opened the scoring from a fixed ball after it reached Benzema’s head and then to Casemiro’s head, who turned it to find Alaba, and deposited it into the net (37). The result remained unchanged until the end of the first half, then Real started the second with a very dangerous opportunity for Vinicius Junior, the brilliance of Trapp in stopping it (55), before the luck of Casemiro, whose missile shot hit the crossbar (61). The Royal Club’s attempt resulted in a second goal in the 66th minute, its hero Benzema, who received the ball with a pass from the left side through Vinicius Junior, and fired it from the outskirts of the area to the right of Trapp, who touched it without being able to stop it.

With his 324th goal in a Real shirt in all competitions, Benzema was ranked second on the list of historical scorers for the Royal Club in front of Raul Gonzalez (323) and behind Portuguese Cristiano Ronaldo (450), according to “Opta” statistics. Thus, the Frenchman celebrated in the best way by being the most successful player in the Continental Super Cup (four times) with the Italian Paolo Maldini and the Brazilian Dani Alves.