Real Madrid to Riyadh on board the “Emirates Airlines” 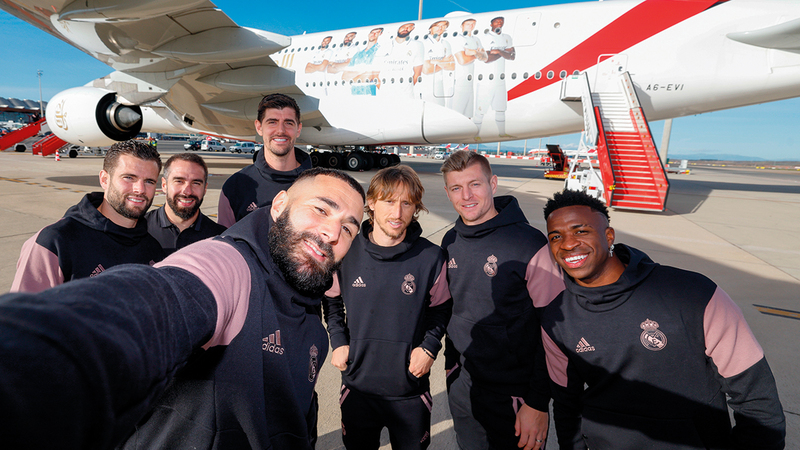 Emirates Airlines, the largest international carrier in the world and the main and official sponsor of Real Madrid, welcomed the Spanish football team on a special flight with the A380, which took off from Madrid to Riyadh. One of the club’s most famous players.

The club’s team will arrive in Saudi Arabia ahead of the Spanish Super Cup semi-final match against Valencia today.

The poster includes a group shot of Real Madrid stars Nacho Fernandez, Dani Carvajal, Thibaut Courtois, Karim Benzema (center), Luka Modric, Toni Kroos and Vinnie Junior. The poster covers an area of ​​125 square meters on each side of the Emirates A380, and will remain for five months on the plane, which will serve regular flights to various Emirates Airlines destinations, including London Heathrow, New York and Melbourne.

Emirates Airlines’ relationship as a major and official sponsor of Real Madrid dates back to 2013, and the carrier put the first poster showing the club’s players for the first time on one of its aircraft (Airbus A380) in 2015. Emirates Airlines recently announced the extension of its partnership as a major sponsor and official carrier of Real Madrid. Until 2026, what makes this partnership historic and the longest shirt sponsorship in LaLiga history.

It is noteworthy that Emirates Airlines launched a service to Madrid in 2011, and currently operates a daily flight to the Spanish capital with its modern aircraft, the Airbus A380 and Boeing 777.