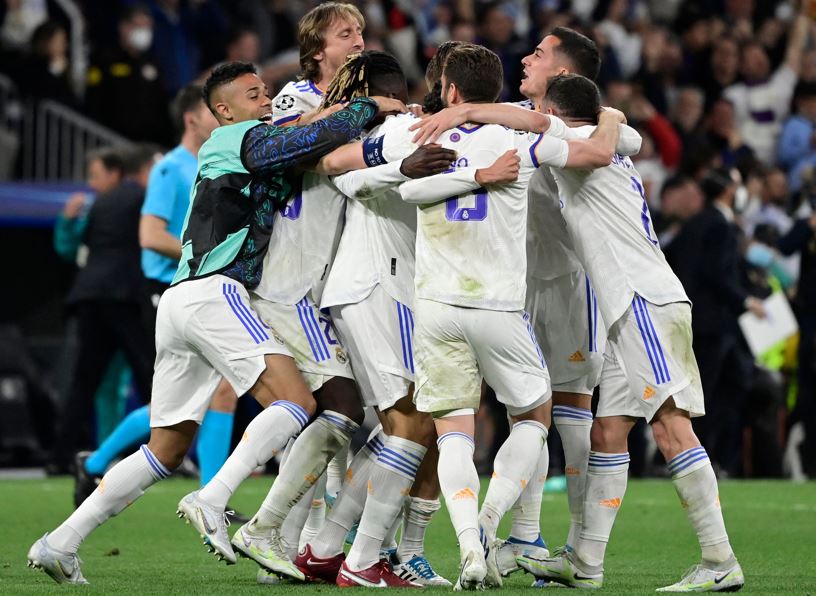 After a crazy scenario, Real Madrid reached the Champions League final today, after turning the table on its guest, Manchester City, by scoring two deadly goals in the original time, before coming out victorious 3-1 after the extension in the semi-final second leg, to set a date with Liverpool.

This is the fourth remontada of Real in a month and a half after Paris Saint-Germain and Chelsea in the Champions and Seville in the League.

Real Madrid entered the confrontation losing 3-4 in the first leg before falling behind again with a goal of the Algerian Riyad Mahrez (73), putting the English team on its way to the second final in a row, but the Brazilian substitute Rodrygo scored two fatal goals (90 and 90 + 1), imposing two additional runs, In both of them, the Royal decided the result in his favour, with a penalty kick to its captain and international top scorer, French Karim Benzema (95).
The confrontation between Real Madrid and Liverpool will be renewed in the final on May 28 at the “Stade d’Or France” in the outskirts of Paris, for the third time after the first in 1981 when the English team won 1-0, and the second in 2018 when the Spanish team crowned its thirteenth title in its history by winning 3-1.

As for City, who reached the first final last year when they lost to compatriot Chelsea 1-0, I have a new European disappointment and will have to wait again in order to achieve a long-awaited first continental title. After winning his thirty-fifth title in the League on Saturday, Real Madrid entered the search for the seventeenth final in its history.

Real repeated the “Remontada” for the third time in a row in the competition, after he achieved that against Paris Saint-Germain and Chelsea in the eighth and quarter-finals, respectively, this season. As for City, after the disappointment of the exit, it will be content with competing for the English Premier League title for the fourth time in five seasons, as it leads by a point from Liverpool, four stages before the end.

Once again, Spanish coach Pep Guardiola failed to lead the Emirati-owned team to European glory and reach its fourth final in the Champions League, after winning the title in 2009 and 2011 with Barcelona. As for the Italian Carlo Ancelotti, who became the first coach to achieve the title of the five major leagues, he will seek to write a new chapter in the history of football as the first coach to win the title of the continental competition four times, after reaching the fifth final as a technical director, knowing that he achieved the title three times, with his compatriot Milan in 2003 2007 and Real Madrid in 2014.

Real Madrid took revenge on City, who eliminated him from the final price of the 2019-2020 season, knowing that the royal had removed his English counterpart from the semi-finals of the 2015-2016 season on his way to his eleventh title. The first half came evenly between the two teams, with possession, but City was the most dangerous in opportunity and was able to score the goal, had it not been for the brilliance of the giant Belgian goalkeeper Thibaut Courtois, and the returning right back Kyle Walker succeeded in limiting the danger of the Brazilian Vinicius Junior, who did not excel in any double. In the first 45 minutes.

Real raised its rhythm in the second and was close to the opening with its launch whistle through Vinicius, but the first goal was for Mahrez with a wonderful shot from the right from the right inside the area. Six goals in one season in the Champions League.
While the match was breathing its last, Rodrygo scored two goals in the killer time to impose two additional times, in which the decisive word was for Benzema from a penalty kick that he obtained himself after being obstructed by the Portuguese Rabon Diach, raising his score to 43 goals this season, including 15 in the Champions League, enhancing his chances of winning. The golden ball.

😅 “Some things in life are impossible to explain… How are Real Madrid in the final of the @ChampionsLeague?”