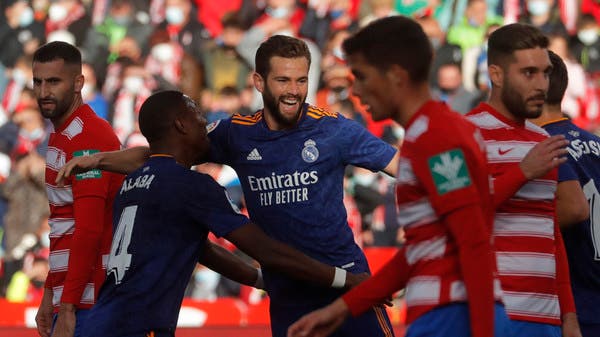 Real Madrid regained the top spot in the Spanish Football League, after its valuable and deserved victory 4-1 at its host Granada on Sunday in the fourteenth stage of the competition, which also witnessed a 4-0 victory over Getafe at its guest Cadiz.

The balance of Real, seeking to regain the title, which it lost last season in favor of its arch-rival Atletico Madrid, rose to 30 points from 13 games, to advance to the top by two points in front of its closest rivals Seville, equal with it in the same number of matches.

And the royal team, which has a postponed match, as is the case of Seville, may fall to the runners-up, if Real Sociedad, who is currently third with 28 points, wins against its guest Valencia, at a later time in the same stage.

On the other hand, Granada, who received its sixth loss in the competition this season, with two wins and 5 draws, froze at 11 points in the eighteenth place (third from the bottom).

Marco Asensio opened the scoring for Real in the 19th minute, before Nacho Fernandez added the second goal in the 25th minute, but Colombian Luis Suarez reduced the difference by scoring a goal for Granada in the 34th minute. The Brazilian Vinicius Junior added the third goal for Real in the 56th minute, after which Granada’s suffering doubled. , who played with ten men after his player Moncho Rodriguez was sent off in the 67th minute, and then Roberto Moreno, the coach of the Andalusian team, was sent off for objecting to the referee. Real, who won his ninth victory in the championship this season and the third in a row, took advantage of the numerical shortage in the ranks of his opponent, after Ferland Mendy scored the fourth goal in the 76th minute.

This meeting is considered a rehearsal for Real before its important meeting against its host Sheriff Tiraspol of Moldova next Wednesday in the Champions League, as the white team seeks to collect the three points to reach the playoffs in the continental competition.

Getafe went to the bottom of the competition, after achieving a valuable and deserved 4-0 victory over its guest, Cadiz, earlier. The balance of Getafe, which achieved its second victory in the championship this season, rose to 9 points in 19th place (penultimate), while Cadiz’s balance stopped at 12 points in 16th place. Getafe advanced early with a goal signed by Matias Oliveira Miramontes in the seventh minute, before his colleagues Jorge Cuenca and Enis Onal added the second and third goals in the 60th and 81st minutes, respectively.

Jaime Mata concluded the Getafe goals festival, scoring the fourth goal in the fourth minute of the calculated time instead of lost for the second half.