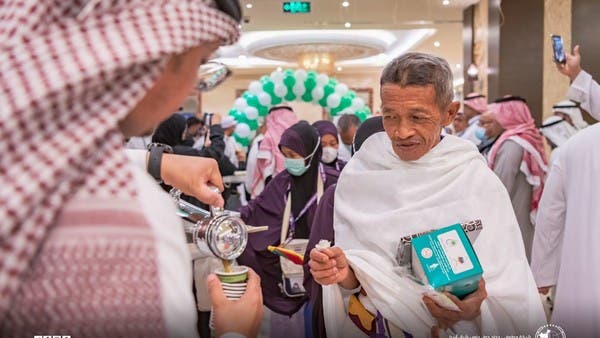 In a festive atmosphere, the raft companies welcomed the pilgrims abroad with blessed Zamzam water, Saudi coffee, luxurious dates and bouquets of roses.

Nader bin Osama Pasha, head of Center No. 9 of the Tawafa Company for Pilgrims of Turkey and Muslims of Europe, America and Australia, told Al Arabiya.net: “Reception programs are being implemented for pilgrims at their residence in Makkah with Zamzam water, Saudi coffee and varieties of dates, as well as offering roses. Sweets and ready-made meals.

He added: “The raft companies provide the best services to pilgrims from their arrival until their departure to their homelands after performing the Hajj rituals with ease and ease, in light of the great services and giant projects that the government of the Custodian of the Two Holy Mosques has prepared, so that the pilgrims can perform their rituals with comfort, tranquility, security and safety.” .

While the pilgrims expressed their happiness at arriving in the Holy Land, stressing that the hospitality and good reception they found was not surprising, and they thanked the government of the Custodian of the Two Holy Mosques King Salman bin Abdulaziz Al Saud for its efforts to comfort the pilgrims, and for what they found of Good hospitality and reception, which reflects the interest of the Kingdom, the government and the people, in its guests who come to it from all parts of the earth to perform the rites of Hajj.

The pilgrims continue to flock to Mecca, amid a warm welcome from the raft companies that provide the pilgrims with souvenirs, sprinkle roses on them and water them with Zamzam water, while chanting songs welcoming the pilgrims.