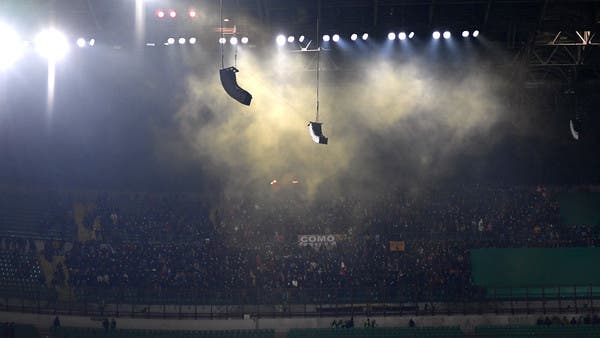 The Italian Football League (Serie A) said on Saturday that all clubs in the competition decided unanimously to reduce the number of fans in the next two rounds in January to five thousand to contribute to the fight against the Corona virus.

A statement from the association stated that the new restrictions will apply in the next week and the following, and that no tickets will be sold to fans of visiting clubs.

Attendance was reduced to 50 percent for the Sunday tour.

On Friday, Italian Prime Minister Mario Draghi spoke to Gabriele Gravina, president of the Italian Federation, about the possibility of holding matches without fans or suspending the tournament temporarily.

The Italian Ministry of Health announced that 19,752 cases of corona were recorded on Saturday, compared to 108,304 on Friday, while the number of deaths decreased from 223 to 184.

In December, the Italian government reduced attendance at outdoor sports from 75 percent to 50 percent.

Four of the ten league matches on Thursday were postponed due to several clubs being placed in quarantine due to Corona.

On Saturday, ANSA news agency said that the League had succeeded in its appeal against the decision of the health authorities to put the Udinese, Salernitana and Turin clubs in quarantine, after the negative samples of the players were rejected.

And Bologna will remain in stone after the League’s appeal was rejected in a court in Emilia.

It was not yet clear how many matches could be postponed in Sunday’s round.