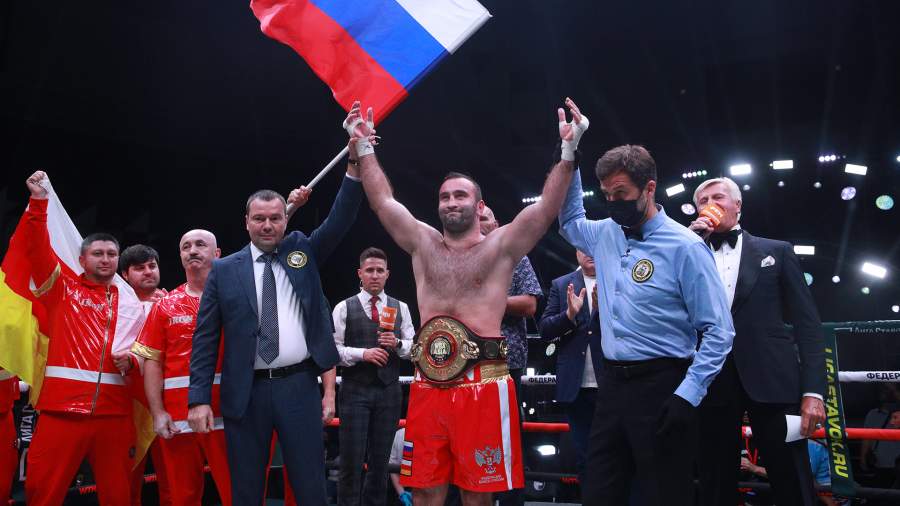 
Former IBF and WBA champion Murat Gassiev fought his second heavyweight fight. At the Dynamo volleyball arena, he defeated the German Michael Wallisch by technical knockout. The fight ended at the end of the fourth round after the Russian boxer struck a series of blows to the opponent and he ended up in the ring. The German wanted to continue, but after a few seconds the referee decided to stop the fight. Gassiev’s successful full-fledged debut in the heavyweight division was broadcast live on the REN TV channel.

After Alexander Povetkin retired from his boxing career, Murat Gassiev became Russia’s main hope in heavyweight. Of course, there is also the undefeated huge Arslanbek Makhmudov (by the way, also a native of North Ossetia), but he has not yet had big victories in his professional career. Gassiev, although he is only 27, had such, and not one. Even in the first heavyweight division, where he was the IBF (2016-2018) and WBA (2018) world champion, Murat fought in the final of the World Boxing Super Series and lost by unanimous decision to Alexander Usik.

– I think that I am still far from Sasha Povetkin, – said Murat Gassiev. – He is an Olympic champion, and he boxed with very good opponents. I cannot compare myself with him. But I will try to reach his level.

After being defeated by Usyk, the Ossetian did not box for more than two years. Battles were scheduled, but were thwarted. Moreover, these were heavyweight matches, where Gassiev, a rather big guy for a cruiserweight, decided to go completely. Returning to the ring took place on October 31 last year – in Krasnaya Polyana, he easily, already at the 107th second, knocked out 43-year-old Nuri Seferi. The fight turned out to be completely uncompetitive: the Albanian did not carry out a single attack – and did not even try to carry it out. In an interview with Izvestia Murat’s coach Vitaly Slanov admitted that the fight with Seferi cannot be called a real test for Gassiev, therefore, the debut in the heavyweight division will take place against Wallisch.

Wallisch, 35, is an accomplished boxer. He approached this fight with a record of 22 wins (15 KOs), 4 losses. And of the last seven, he lost four. The most famous rivals in Michael’s career are Briton Joe Joyce (he lost to him by TKO in July 2020) and Christian Hammer from Romania, who was defeated by Povetkin in December 2017 on points. Hammer met with Wallisch exactly one year after the fight with the Russian boxer and knocked out. All in all, The German’s track record does not look impressive, but you can’t call him a jornimen either – 22-4 is generally a good statistic.

“Plus Wallisha – he is a real heavyweight with great experience,” Gassiev emphasized at a press conference held at the Izvestia MIC. – Another plus for him is that his mother was born in Russia. This means that there is a part of the Russian character in him.

Despite Gassiev’s words of praise, it was he who was considered the main favorite of the battle. Front at the beginning of the fight, the experts agreed that if the German stays for more than four rounds, then it will already be a surprise… Still, Michael accepted the challenge for this fight just four weeks ago, so his current physical form was questionable.

For the first two rounds, there was no threat from either side. The rivals were looking closely. In the third round, Murat began to break the distance, get closer, delivered a couple of powerful punches to the body, and then hit the right tightly. Wallisch staggered, and the break was already panting. In the fourth round, the Russian’s advantage has already become overwhelming… Michael focused exclusively on defense, pressed against the ropes and his position became critical. One of the blows to the right of Murat reached the goal and the opponent ended up on the floor. Wallisch got up and decided to continue. But the finishing move immediately followed and the referee stopped the fight in order to preserve the health of the German boxer.

“Thank you for taking the time to visit my fight in such a difficult period,” Gassiev said after the end of the fight. – Thank you, everyone who came today, who, in three years, when I had injuries, did not turn away and continued to believe in my talent… My promoters and the Rossi Boxing Federation did a good job and gave me the opportunity to come back. I will continue to work and improve. Thanks to Michael for accepting the short challenge. He is a worthy contender. I will do my best to achieve champion fights.

Gassiev pursues the highest goals. And his most intriguing potential fight is a revenge with Alexander Usik. While it is far away, it seems quite likely in the future. This year, the Ukrainian is likely to meet with the IBF, WBA, WBO and IBO World Heavyweight Champion Anthony Joshua.

Among the other fights of the REN TV Fight Club, it is worth highlighting the defeat of Edgar Ghukasyan from Ricardo Villalba.

The fight was stopped in the fourth round due to a prohibited blow from the Russian boxer. The Argentine became the WBA Asia First Middleweight Champion. Chances are high that their revenge will take place in the near future.

In the co-main fight of the evening, Olympic medalist Mikhail Aloyan defeated by unanimous decision Johana Mchania from Tanzania. The Russian dominated most of the fight and naturally won another victory in the professional ring. Finally, Edgard Moskvichev defeated Andrey Kalyuzhny by unanimous decision. He received the title of Russian middleweight champion.

The date of the opening ceremony of the Tokyo Olympics, UAE time

Rakul in danger .. Screams to be saved! .. Video goes viral

Biden talks about plans to meet with Floyd’s family

Didn’t like the food on the train? Complain to the IRCTC Food Inspector