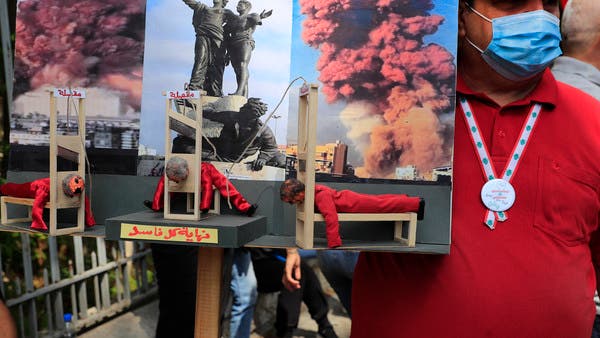 In a new indication of political interference in all sectors in Lebanon, the corridors of the Palace of Justice in Beirut witnessed during the past hours, a movement of resignations of judges as a result of the faltering situation of justice in general, which harms its prestige and position, in addition to the poor living and economic conditions that do not provide anyone in Lebanon Whatever his position and the nature of his work.

It was reported that four judges resigned from the wire and deposited their resignations with the President of the Supreme Judicial Council, Suhail Abboud, without a decision on it.

According to an informed judicial source who spoke to Al-Arabiya.net, these resignations amount to a judicial uprising against political interference in the work of the judiciary, which was clearly and explicitly manifested in many files, including judicial appointments, but the most prominent of which was recently the investigations into the explosion of the Port of Beirut and the work of the investigator. Justice Judge Tariq Al-Bitar.

While it seemed remarkable that two of these judges (Naji Eid and Janet Hanna, were looking into the issue of Yad al-Bitar), the judicial source was keen to stress that the resignation had nothing to do with what is happening in the port’s investigation file, but at the same time indicated that “it may be possible Saying that the port file was the straw that broke the camel’s back, as the judge has become a target of political and popular correctness, and campaigns are launched against him through the media and social media sites and on the street for no other reason than because he is looking into a file in which politicians and official officials are involved.

Protesters from supporters of Hezbollah and the Amal movement against the judicial investigator in the Beirut explosion, Judge Tariq Bitar (Associated Press)

He also stressed, “The resignation of these judges will not be the last, as there are judges who intend to take the same step, for the same reasons as well, knowing that those who resign are judges who are known for their independent work and integrity, and they are outside the ruling political system and are not subject to political pressure.”

It is noteworthy that Hezbollah had recently escalated its rhetoric towards the judicial investigator in the Beirut port explosion, linking the stability of the political situation in the country to his resignation.

The Secretary-General of the party, Hassan Nasrallah, described the aforementioned judge as a “politician”, followed by his deputy, Sheikh Naim Qassem, who considered that “it has become a real problem in Lebanon.”

These positions came after the party’s Liaison and Coordination Unit official, Wafiq Safa, threatened to “remove” al-Bitar (his removal from his position) because he was not working according to what he wanted.

A few days ago, Hezbollah Deputy Secretary-General Naim Qassem said, “The scene of the judiciary today in Lebanon is unhealthy. It has nothing to do with an accident or a judge. It has to do with an entire judicial system that overlaps in an unusual way. It is necessary to reconsider and find a solution, otherwise the judicial reality is not. healthy.”

It is noteworthy that in Lebanon, a country based on political and sectarian quotas, the judiciary has not remained immune to favoritism, as politics interferes even in appointments, especially in the Supreme Judicial Council, the highest judicial authority.

The investigation into the port explosion was mired in the labyrinths of politics and then in legal chaos during the last period. Since he received the investigation about a year ago, 16 lawsuits have been pursued by judicial investigator Tariq Bitar, which were submitted to various courts, demanding that he stop his hand and transfer the case to another judge, and led to the suspension of the investigation several times.

After the courts dismissed several cases for various reasons, the judges found themselves subject to lawsuits brought by the defendants’ officials to question the correctness of their decisions.