Revisiting the Past: Protests Gain Strength in Armenia 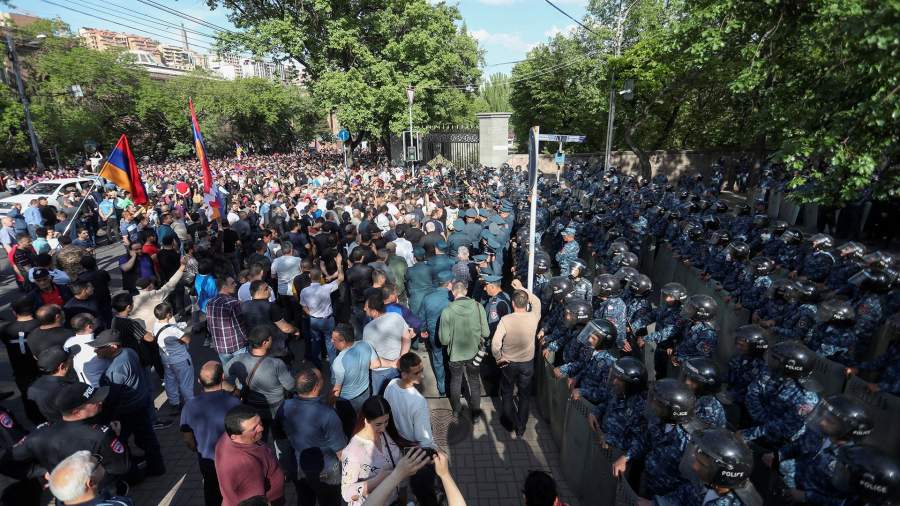 For more than a week, anti-government protests have been going on in Armenia, gathering thousands of people. Tents appeared in the center of Yerevan, the central streets and highways of the capital periodically overlap. Activists are dissatisfied with the position of the prime minister in the negotiations with Azerbaijan on Nagorno-Karabakh and demand the resignation of the politician. Many people compare the situation with the spring of 2018, when Nikol Pashinyan himself came to power. Details – in the material “Izvestia”.

“92 people were detained”, — reported in the Yerevan police on May 5. The protesters are opposition supporters who blocked the streets of the city and demanded the resignation of Prime Minister Nikol Pashinyan.

Anti-government marches, rallies and actions have been taking place in the Armenian capital every day since April 17. Demonstrators shout “Armenia without Nikola”. The protests began after the head of government told parliament about the need to “lower the bar on the status of Karabakh” and sign a peace agreement with Azerbaijan.”

The opposition accused the prime minister of allegedly being ready to transfer Nagorno-Karabakh under the control of Baku. Pashinyan, in turn, replies that it was not he who failed the negotiations on Nagorno-Karabakh, but Serzh Sargsyan, who used to be president and then head of government.

Recently, the protests have changed: activists periodically block the central streets of Yerevan and roads that connect the cities of the country, in addition, tents have appeared in the city center, which shows the readiness of the protesters to fight further. To this were added bloodless, but at the same time decisive assaults on administrative buildings.

On May 4, the oppositionists were going to head to the country’s parliament, where the prime minister was supposed to speak, to demand his resignation. The police feared the seizure of the building. However, this did not happen – not the demonstrators, but the deputies of the opposition factions “Armenia” and “I have the Honor” during the government hour demanded Pashinyan’s resignation. During his answer, they defiantly left the meeting room, shouting “Nicol is a traitor!” and join the protesters. 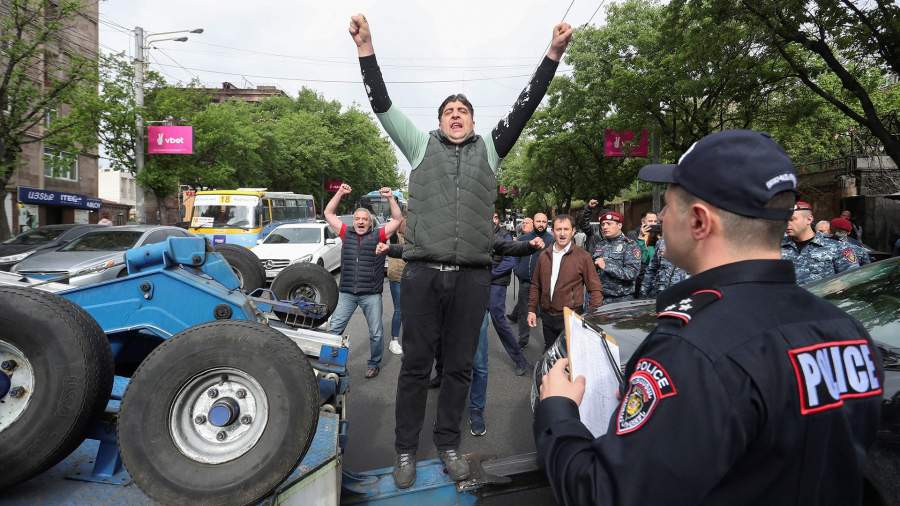 They reached the building of the Ministry of Foreign Affairs, at the entrance to which the vice-speaker of the National Assembly of Armenia, Ishkhan Saghatelyan, was allowed by the police to hang the flag of the unrecognized Nagorno-Karabakh Republic on the building.

So far no interest

Similar tactics were followed by activists in 2018, when Nikol Pashinyan came to power as a result. With a backpack on his back, he left Gyumri and reached the capital, where, with the support of hundreds of thousands of fellow citizens, he overthrew the so-called Karabakh clan.

The difference between the current actions is that the protesters do not have a single leader from the opposition. Thus, the heads of the Hayastan and I have the Honor parliamentary factions Robert Kocharyan and Artur Vanetsyan are most actively against Pashinyan. They, by the way, call the protests the “last battle” with the Pashinyan regime. However, firstly, there is serious competition between politicians, and secondly, it cannot be said that they enjoy serious support from voters.

It is still difficult to say how massive the subsequent actions can be. So, on May 1, 15,000 activists gathered at France Square in Yerevan. 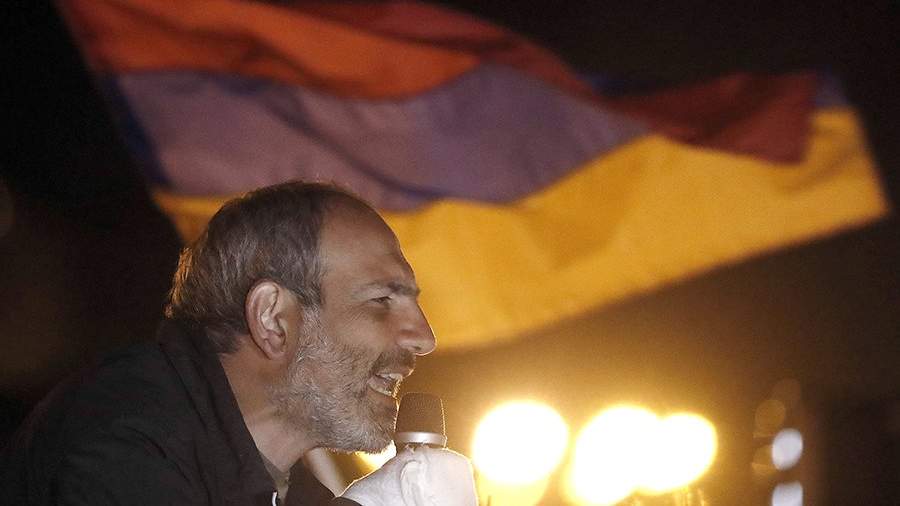 Nikol Pashinyan during a protest, 2018

In general, in the current situation, the Armenian society does not yet show the same interest in the actions that it had in 2018. In addition, the authorities are trying to prevent the growth of protests, but at the same time they avoid the use of violence, realizing that this can lead to an escalation.

In Nagorno-Karabakh itself, at first they also started talking about Pashinyan’s betrayal, but the demonstrations were not particularly supported.

Experts interviewed by Izvestia believe that it is still quite difficult to say how far the protests can go.

The main thing is the number of protesters

The defeat of Yerevan in the Nagorno-Karabakh war in the fall of 2020 led to an internal political crisis in Armenia, orientalist, candidate of political sciences Larisa Aleksanyan notes in an interview with Izvestia.

– Trust in the government was undermined, and this intensified the process of falling popularity of Pashinyan and his party. Since November 2020, protests began, which reached their peak twice – in December 2020 and February 2021, then went into decline. A strong wave of protests began again this April, after Pashinyan’s statement about the need to “lower the bar on the status of Nagorno-Karabakh.” These protests, processions, rallies are the largest since 2018. The cause of the wave of protests was not social problems at all.the political scientist explained.

According to the expert, the citizens of Armenia are participating in the protests because they are dissatisfied with Pashinyan’s domestic policy in matters of cultural and national values ​​and, most importantly, with the Prime Minister’s foreign policy. 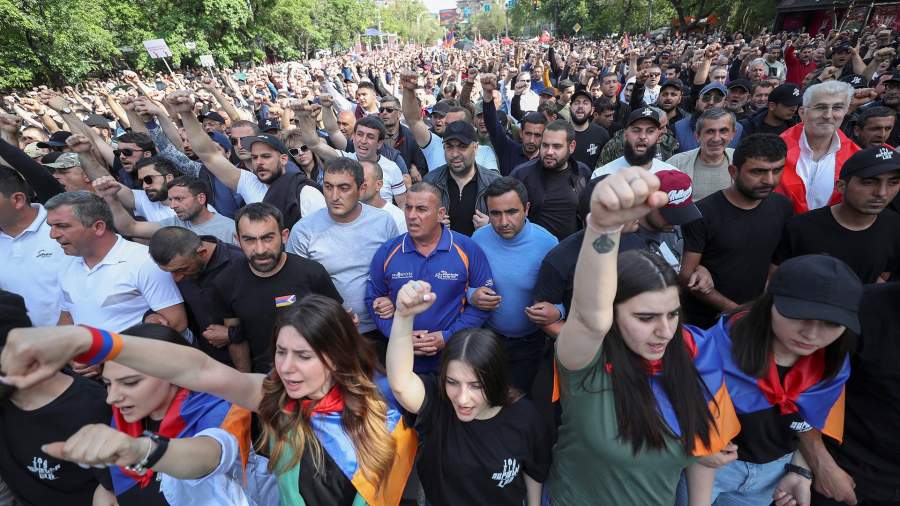 – Especially they do not support the position of the ruling power of Armenia in relation to Turkey and Azerbaijan, on the issue of resolving the Nagorno-Karabakh conflict. The protesters are concerned about the future of Armenia and Artsakh (this is how the unrecognized Nagorno-Karabakh Republic is called in Armenia. – Ed.). They are not united around a specific individual. The number of protesters is growing. The effectiveness and prospects of these actions depend on how many people join them. The ruling force, led by Pashinyan, in turn, uses various levers of pressure on society, trying to maintain power at any cost, Aleksanyan explained.

A similar point of view is shared by the political observer of IAC VERELQ Hayk Khalatyan.

– The protests began after it became clear that the current Armenian government is ready to significantly lower the bar for the future status of Nagorno-Karabakh. Judging by the statements of Pashinyan and his fellow party members, in fact, it is no longer a problem for them to see Nagorno-Karabakh as part of Azerbaijan if a number of conditions are met. This caused outrage among the public and the opposition, who decided that only a change of power in Armenia could save Artsakh. By the way, in Artsakh itself, the authorities and society are also outraged by this– the political scientist explained in an interview with Izvestia.

According to the political scientist, whether Pashinyan manages to stay in power depends on how much the organizers of the protests can expand the number of participants.

– The protests are serious, thousands of people, the authorities understand this, as evidenced by the large concentration of police in Yerevan, but at the same time there is no critical mass that could lead to a change of power. So Pashinyan’s future in power depends on whether the opposition can gather this critical mass.– Khalatyan is sure.