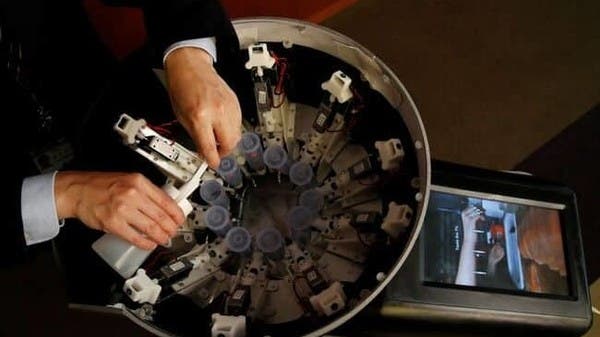 A Japanese professor has developed a prototype of a lickable TV screen that can imitate the flavors of food, another step towards creating a multisensory viewing experience.

The device, called Taste the TV, uses a circular ring of 10 flavor cans that are sprayed together to create a specific food taste, and then the flavor sample is placed on healthy film on a flat screen TV for viewers to experience.

“In the era of the coronavirus, this type of technology can enhance the way people communicate and interact with the outside world,” said Homi Miyashita, a professor at Meiji University.

The goal, he added, was to enable people to experience something like eating at a restaurant on the other side of the world, even while staying at home.

Miyashita works with a team of about 30 students who have produced a variety of flavor related devices, including a fork that makes food taste richer.

He also said he built the Taste the TV prototype himself over the past year. The commercial version costs about 100,000 yen ($875). Potential applications include distance learning for bartenders and chefs, tasting games and tests.

Miyashita has also been in talks with companies about using his spray technology for applications such as a device that can apply the taste of pizza or chocolate to a slice of toast.

It also hopes to create a platform where tastes from around the world can be downloaded and enjoyed by users.

One of the Meiji students showed the prototype Taste the TV to reporters, telling the screen that she wanted to taste sweet chocolate. After several attempts, a robotic sound repeated the arrangement and jets of flavor sprayed a sample onto a plastic sheet.

“It’s a bit like milk chocolate,” the student said. “It’s as sweet as chocolate sauce. Miyashita’s idea of ​​a physical lickable screen might be more suitable for information systems than entertainment. But it’s easy to imagine that one day you can separate the taste system from television.”

This may allow you to have a small flavor diffuser that sprays chemicals onto a tray at just the right moments during the show. Or perhaps movie theaters can install miniature versions of it to taste the popcorn in ways that match the scene.

What Services Can you Get with Comcast Xfinity?

NASA has exhausted my power.. Now on vacation: InSight rover launched by NASA on Mars

EctoLife Amazing.. This is a ‘womb’ that gives birth to 30 thousand babies a year!