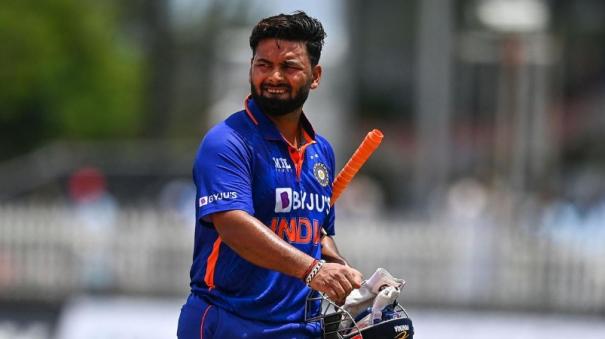 Dehradun: Indian cricketer Rishabh Pant, who was injured in a car accident, is doing well, the hospital doctors said.

Indian cricket team’s wicketkeeper and action player Rishabh Pant was traveling alone on the Delhi-Deradun highway three days ago when his car hit a road block and had an accident.

He was rescued from the accident with serious injuries and has been admitted to Max Hospital in Dehradun, Uttarakhand for advanced treatment. Rishabh Panth’s forehead has been severely scratched at 2 places. Torn ligament in right knee. The right wrist, ankle and toe were injured and the back was bruised. He was then treated. According to the hospital administration, his condition is now stable.

He is said to take 3 to 6 months to fully recover from the injury. A press release issued by the hospital said:

The injured Rishabh Pant has undergone plastic surgery. In the accident, he sustained a cut under his left eye brow. Subsequently, plastic surgery has been successfully conducted in the area. After treatment he is cooperating well. There has been good progress in his health. It says so. In this case, Delhi and District Cricket Association (DTCA) officials went to the hospital and saw him.

DTCA director Shyam Sharma said, “He is cooperating well with the treatment. He has plastic surgery done below his left eyebrow. In this regard, BCCI doctors are also in frequent communication with Max Hospital doctors. The BCCI secretary is also monitoring the situation. As of now, there is no plan to shift Rishabh Pant from Dehradun,” he said.

The state government has decided to honor the employees of Uttarakhand Transport Corporation who saved Rishabh Pant during the accident.

Uttarakhand Chief Minister Pushkar Singh Thami said that the government has decided to honor Transport Corporation driver Sushil Kumar and conductor Paramjeet who helped Rishabh Pant during the upcoming Republic Day celebrations. Both risked their lives to save Rishabh Pant. This is what he said.

Later Chief Minister Pushkar Thami met Rishabh Pant who is undergoing treatment at the hospital. Then he asked the doctors about his health.