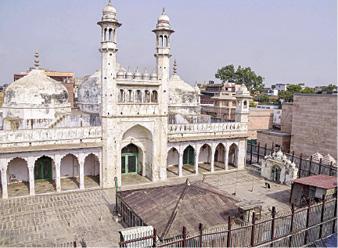 As the temple-mosque controversy continues to escalate across the country, the Shrines Act, which was introduced in 1991, is once again the subject of controversy.

Controversy has erupted over the Gyanwapi Mosque adjacent to the Kasi Viswanathar Temple in Varanasi. The presence of Shivalingam there has been identified in the study and has sparked religious debates across the country.

Meanwhile, the dispute between the Krishna Temple in Mathura and the Shahi Itka Mosque has resurfaced.

The issue was settled by a bilateral agreement in 1973 and an appeal was filed by one of the parties in the Mathura District Court and an order was issued on the 17th.

The order states that the Places of Worship Act does not apply to this case. Moreover, only the trial court can decide whether the 73rd year contract was abusive. Therefore, the trial court has ordered that the case be taken up again and investigated.

Thus, as the temple-mosque controversy continues, the Shrines Act has regained its importance. In 1991, when Prime Minister Narasimha Rao was in power, Advani launched a rath yatra demanding the construction of a Ram temple. When religious tensions arose across the country at that time, the Narasimha Rao government brought in the Places of Worship Act to rectify it.

Key features of the law:

* Since its liberation on August 15, 1947, it has been banned from making any changes to any place of worship. The situation as it was that day should continue.

* It is forbidden to offer any places of worship to another sect or to any other sect within a sect, in whole or in part.

* Any lawsuits seeking changes to places of worship will expire if appeals are pursued. It is no longer possible to prosecute new cases.

* Violators face up to 3 years in prison and a fine.

* This law does not apply to places of worship controlled by the Archaeological Survey of India.

* The law does not apply to the Ram Temple – Babri Masjid issue either.

Thus stated in that Act. The Representation of the People Act was amended in 1951 to remove people’s representatives who violate this law.

However, in the case of Mathura, the Mathura court has ruled that the Places of Worship Act does not apply as the contract has not been concluded and has ordered a retrial.

Similarly, the leaders of the Visva-Hindu Parishad said that the law did not apply in the case of Gyanwapi. If there is a Shiva lingam in the mosque, it would have been on 15.8.1947. Therefore, places of worship argue that the law does not apply to this.

Case in the Supreme Court

Meanwhile, two lawsuits have been filed in the Supreme Court against the Shrines Act 1991. ‘Getting justice is a fundamental right of the Constitution. That law should be declared invalid, as places of worship are deprived of that right. Further, the law should be repealed as it deprives Hindus, Jains, Buddhists and Sikhs of their rights.