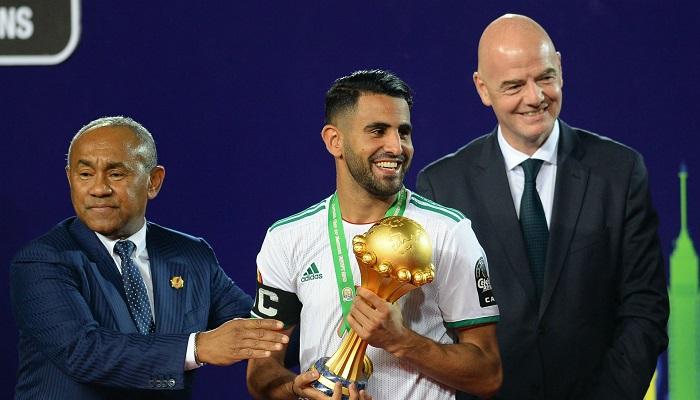 The Algerian star and Manchester City player, Riyad Mahrez, sent a message to the Algerian public in his first appearance before the start of the African Cup of Nations, through which he expressed his happiness while he is in Cameroon, swearing a vow to himself in front of the Algerian public before the start of the tournament, which is the same way that the star took The Egyptian team, Mohamed Salah, in conversation with the Egyptian public, but the latter sent more than one message through pictures on his official account on the social networking site Instagram, to begin the challenge of stars by mobilizing the audience and sending motivational messages in search of eventually returning to the championship title.

Riyad Mahrez said in his message, through a video clip published by the Confederation of African Football, through his account on “Twitter”: “Hello, Riyad, we are here in the African Nations Cup. I just want to thank the Algerian fans for their support.”

The Algerian star, Riyad Mahrez, was absent from the Algeria camp before the start of the tournament to spend a period of rest after participating with his team Manchester City in his matches until January 3, and the Algerian team begins the journey to defend the title of the championship that was crowned in Egypt in the last version against Sierra Leone, on Tomorrow, Tuesday, at “Jaboma” stadium in Douala, in the fifth group competition, which also includes the teams of Côte d’Ivoire, “Ivory Coast” and Equatorial Guinea.

Algerian star Riyad Mahrez concluded his message to the audience, vowing: “We will make you proud of us,” in a message to preserve the title of the championship and the series of successive victories that the Algerian team reached by playing 34 matches without losing.