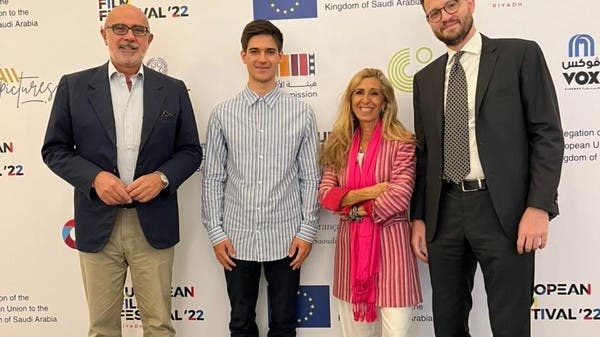 The Italian Embassy in Saudi Arabia expressed its happiness with its participation as a partner in the first edition of the European Film Festival, which is being held in Riyadh.

The Italian ambassador to Saudi Arabia said: “We are very happy to witness this boom in the film industry in Saudi Arabia, which opens new horizons for Italian cinema, to be enjoyed by the growing Saudi audience and lover of films. Through Fare Cinema, which is part of the European Film Festival in Riyadh, I am sure that this event will lead us to another level of Italian-Saudi cultural cooperation.”

For her part, Roaa Al-Madani, CEO of Arab Pictures Group, said: “We are very honored to participate in the celebration of Italian cinema here in Riyadh, creating a cultural exchange between countries, and we are very excited to continue working closely with Green Film and the Trentino Film Commission to pave the way for an environmentally friendly industry. In the future, we will be holding exhibitions and events for distinguished Italian filmmakers in the near future.”

The European Film Festival includes My Brother Chases Dinosaurs by Italian director Stefano Cipani. Riyadh also welcomes the Italian screenwriter and talented young artist Giacomo Mazziriol, who will hold a workshop with young Saudi talents, and a special panel discussion will be held for the Green Film initiative, with the participation of Alberto Pattucci and the Trentino Film Commission. .

The festival is considered a close cooperation between the European Union delegation and the Arab Photo Group, as it happens in conjunction with the international festival Fare Cinema, which is organized by the Ministry of Foreign Affairs and International Cooperation of Italy and the network of Italian embassies, consulates and cultural institutes, in cooperation with the Italian Ministry of Culture and the Italian Association of Film Industry. Audiovisual, Italian Trade Agency, Chinchinta Film Studios, Italy Films for Film and Audiovisual Production, Italian Film Commissions, Italian Film Academy, David Di Donatello Awards and Venice Biennale.