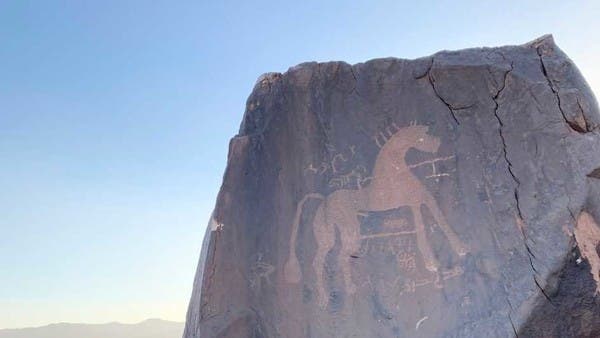 The researcher of rock drawings and inscriptions, Ahmed Al-Nagheither, revealed the existence of a beautiful rock drawing of the Arab horse in the Hail region, and he presented the drawing, indicating that he had documented the site with pictures to confirm the Arab man’s love for horses.

He told Al Arabiya.net that the picture is in one of the mountains of the Hail region, which is Mount Arnan, famous for its ancient Arabic poetry.

The researcher explained that in 2015, the rock drawings were recorded in the Hail region in Rata, Al-Manjour and Jibha, which is the fourth site recorded in the Kingdom, and was visited by many travelers such as Huber, Yen, Qurmani and Oteng.

The researcher stated that the view is of a strong young mare, and this drawing was executed on the surface of a rocky massif, along with a text in the Thamudic writing, by the method of grooving, and braiding and combing the hair of the head and tail was done.

This site was registered in the list of the Heritage Authority in Saudi Arabia due to its importance in documenting the relationship of humans with horses in this part of the world.