Rolando: My ambition is to develop women’s football in the UAE 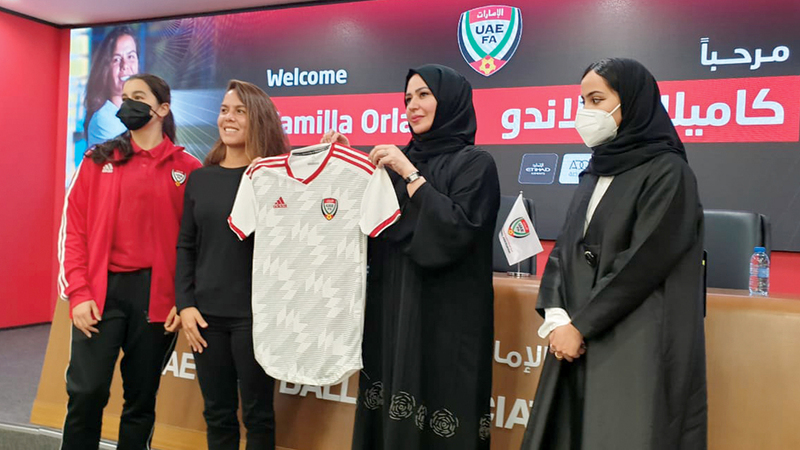 The Football Association announced, during a press conference, yesterday, at its headquarters in Dubai, that it has officially contracted with Brazilian coach Camila Rolando to occupy the position of coach for the women’s soccer teams, on a two-year contract that is renewable.

Member of the Board of Directors of the Federation, Chairperson of the Women’s Football Committee, Amal Bushlach, said during the press conference: “We have great confidence in the Brazilian school in training through coach Camila to bring about the desired development in the game in the Emirates, noting that women’s football in the country has previously gone through many training schools. Starting with the Australian school, then the Tunisian school, and now the Brazilian school.” Buchlach stressed that their goal is to develop women’s football and build a strong women’s football team that will supervise Emirati football in external forums.

For her part, coach Camila Rolando, 36, expressed her happiness to work in the UAE and thanked the Football Association and Amal Bouchlach for giving her confidence to supervise the technical supervision of women’s football teams in all its stages, especially the first team, noting that she went through many stations during her career in Football, both since she was a player and then turned to work in the field of coaching, noting that her experience in the field of training extends to about 15 years, during which she trained many clubs and teams in Brazil, and during her coaching career she received many courses in the field of coaching.

• The experience of the trainer Camila in the field of training extends for about 15 years.