Roma legend Totti breaks silence about his separation from his wife 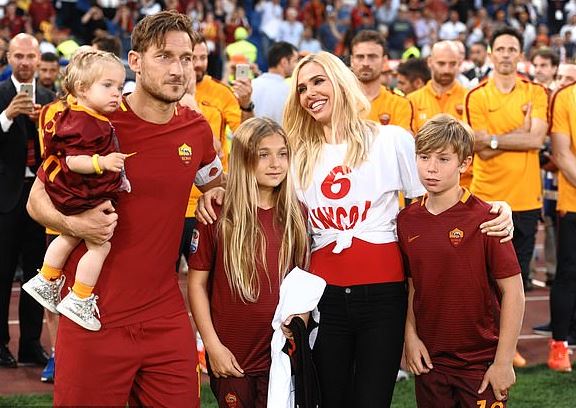 Former Roma captain Francesco Totti has broken silence on the issue of his separation from his wife, TV presenter Ilari Blasi. Totti said in an exclusive interview with the Italian newspaper “Il Corriere della Sera”, published today, that he was not the first to betray his wife. He pointed out that his relationship with “Naomi Pucci” began this year.

Totti explained that his life and the wife of Elari Blassie experienced ups and downs like any couple, until the real crisis erupted between March and April of last year.
He pointed out that rumors circulated in September of last year about his wife’s relationship with another person, and he received warnings from people he trusted, which made him suspicious, and prompted him to look at her phone, and found messages about this story, which shocked him. He added that neither he nor his wife thought of spying on each other’s phone during the twenty years they spent together. Totti did not name this person, but indicated that he belongs to a world far from football stars.

He indicated that he did not tell anyone about the matter, not even his close friend, and preferred to pretend that nothing had happened to protect his family. He added that he and his wife tried to reform their marriage, but the attempt was not good. Totti expressed his hope that an agreement would be reached that would end the matter away from the courts, but he admitted that he would resort to lawyers, because his wife would like to stay in the house (Villa Delor), and rejects the proposal to divide it or rotate to stay in it for the sake of their children. Totti said that he would remain silent again, regardless of the response to his statements in order to protect his children.

Villa Delors consists of 25 rooms with a swimming pool, and is called in Rome the “White House”. Italian media describe the separation of Totti, nicknamed King of Rome, and Ilari Blasi as a year’s divorce. The couple announced their separation in July after 20 years of marriage.