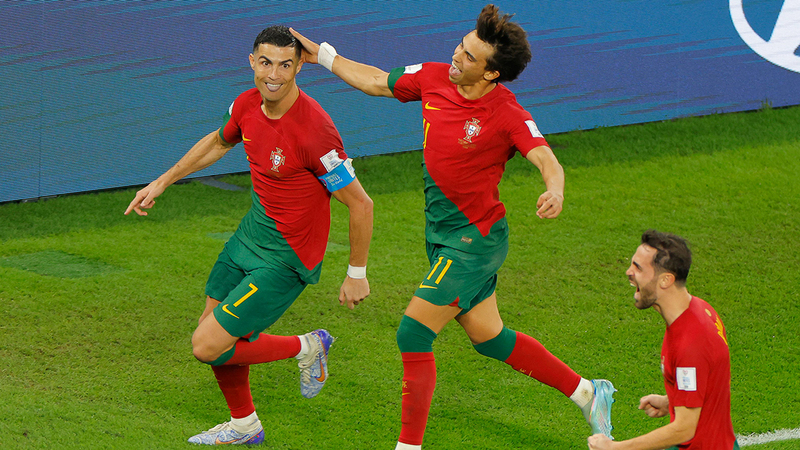 Cristiano Ronaldo led Portugal to an exciting 3-2 victory over Ghana, yesterday, in the first round of Group H competitions for the Qatar World Cup, and he entered history after becoming the first player to score in five versions of the finals.

After a sterile first half, the 37-year-old opened the scoring for the 2016 European Champions from a controversial penalty kick (65), and after Andre Ayew equalized for Ghana (73), Joao Felix returned and gave the Portuguese the lead (78), and added substitute Rafael Liao III (80), Before substitute Osman Bockari narrowed the difference (89).

The group includes Uruguay and South Korea, who tied 0-0, to lead «Seleção Europe» with three points.

Hours after announcing the termination of his contract with Manchester United, due to his criticism of the club and its Dutch coach Eric ten Hag, Cristiano Ronaldo set foot on the 974 stadium as the only outright striker in coach Fernando Santos’ squad, to join the club of players who played in the finals five times alongside his Argentine rival Lionel. Messi, Mexican goalkeeper Guillermo Ochoa, and those who preceded them: Mexican goalkeeper Antonio Carvajal and Rafael Marques, Italian goalkeeper Gianluigi Buffon, and German Lothar Matthaus.