Ronaldo is not eligible to play with the Saudi victory 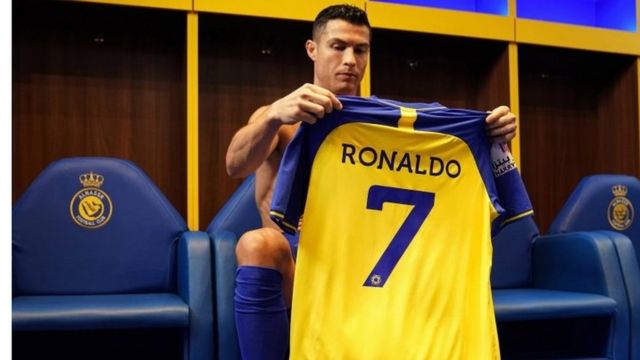 The Saudi club Al-Nasr has not yet registered its new Portuguese player, Cristiano Ronaldo, in its list with the Saudi Football Association, which prevents him from playing official matches, according to two club officials, today, Thursday.
The two officials confirmed the arrival of the international card for the 37-year-old player from England on Wednesday evening, after signing a fictional two-and-a-half-year contract worth more than 200 million euros.
However, the first official, who preferred not to be named because he was not authorized to speak to the media, said: “Ronaldo’s international card has arrived, but the victory has not yet been recorded because there is no vacancy for a foreign player.”
The Al-Nasr list, which is nicknamed in Saudi Arabia as “Al-Alamy”, includes 8 foreign players, which is the maximum limit allowed by the regulations governing the Saudi League.
The source added, “A foreign player must leave to register Ronaldo, either by selling or by terminating the contract by mutual consent.”
The second source, who spoke on condition of anonymity, confirmed that the “Madeira missile” was not registered until Thursday afternoon, despite the arrival of his card.
He continued, “There are ongoing negotiations to sell one of the players, but they have not reached their final stages yet.”
The current victory squad, which is supervised by French coach Rudi Garcia, includes Colombian goalkeeper David Ospina, Ivory Coast defender Gislan Konan, Spanish defender Alvaro Gonzalez, Brazilian midfielder Luiz Gustavo, Uzbek midfielder Jalaluddin Masharipov, Argentine striker Goncalo “Betty” Martinez, Brazilian striker Anderson Talisca and Cameroonian striker Vincent Aboubacar.
Reports in the local media indicated that Uzbek Masharipov is the closest to leaving for a local club.
The two officials confirmed that Ronaldo will not participate Thursday in the Al-Nassr match against Al-Ta’i for the twelfth round of the league, which starts at six o’clock local time, due to his failure to register.
The two officials refused to confirm whether the player’s card came with a penalty of banning him from playing for two matches or not.
Ronaldo was punished with a two-match ban last November for smashing a mobile phone in the hands of a child Everton fan after the match his former club Manchester United lost last April.
An official in the Saudi Football Association referred France Press to Al-Nasr Club in response to a question about the registration of the “Don” or the arrival of his card accompanied by the two-match penalty.
All tickets for the meeting, which will be held at the “Marsool Park” stadium for Al-Nasr, which can accommodate more than 25,000 spectators, have sold out.
Al-Nasr is at the top of the Saudi League, with 26 points in 11 games.
It is expected that Al-Nasr fans will raise a special tifo (a slogan drawn by fans on the runway) bearing Ronaldo’s words at his presentation ceremony, “I am my world,” according to what close to the Al-Nasr Fans Association reported.