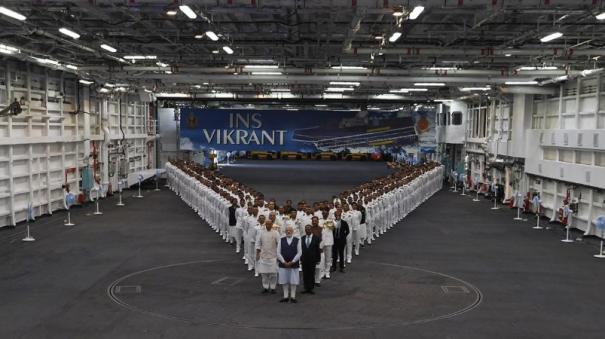 Accordingly, such a vessel was manufactured locally. This new warship INS Vikrant was launched and commissioned in 2013. With all the work on the ship completed, it was recently handed over to the Navy and has now been dedicated to the nation by Prime Minister Modi.

> Cost: At a cost of Rs 20,000 crore, the new warship, designed by the Navy’s Warship Design Wing and manufactured at the Kochi Shipyard, has many modern automated features. The ship features products from more than 100 Indian MSMEs. In this regard, the Prime Minister’s Office said, ‘In the field of defence, the new Vikrant INS ship is a great example of the Prime Minister’s self-reliance India policy’.

Deputy Commander of the Navy, Vice Admiral S.N. Garmet says, “The trial of loading and unloading naval warplanes on the new ship will begin in November and will be completed by the middle of next year. MiG-29K fighter jets will be operated on this ship for the first few years,” he said. The induction of INS Vikrant into the Navy is seen as a significant step forward in India’s policy of self-reliance in the defense sector.