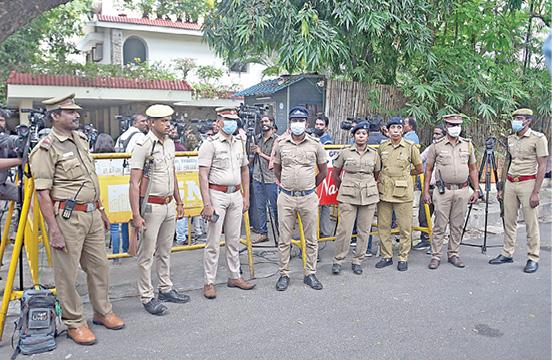 In this context, the CBI yesterday filed a fresh case against Karthi Chidambaram alleging that 263 Chinese had been illegally issued visas when P. Chidambaram was the Union Minister during the Congress regime in mid-2009-2014. The details are as follows:

The Talwandi Sabo Power Project was implemented in the state of Punjab when P. Chidambaram was the Union Minister during the period 2009-2014. The 1,980 MW power plant, located in Mansa, Punjab, was awarded to China-based Shandong Electric Power Construction Corp (Sepco). Then there was a delay in building the power plan.

Thus the company tried to bring Chinese technicians from China to India. This required visas above the ceiling set by the Union Home Ministry. Therefore, the Chinese company concerned is said to have approached Karthi Chidambaram through his close associates. Subsequently, 263 visas were issued to Chinese company officials in violation of government rules. It is said that Rs. 50 lakh has been paid as bribe for this. Currently, the CBI has registered a new case against Karthi Chidambaram in this regard.

Karthi Chidambaram is currently in London on a fresh trial. Karthi Chidambaram’s daughter is studying in London. He has gone to London to see him. Similarly, P. Chidambaram has gone to Rajasthan due to party work. Both were not in Chennai at the time of the test. This sudden raid by CBI officials has caused a stir in the political arena.

P. Chidambaram posted on Twitter about the raid: The CBI has raided my house in Chennai and Delhi. They found nothing in the test that had been going on since morning. They could not find anything. My name was not mentioned as guilty in the first information report (FIR) shown to me by the CBI. This moment where the CBI is conducting an investigation is interesting. Thus it is stated.

In this case, the Congress party has condemned the experiment. On Twitter, Congress general secretary Randeep Singh Surjewala said, ‘P. Chidambaram is a nationalist and a patriot. His commitment to the country is beyond doubt. The sowing of evidence-based absurd allegations by the CBI against the former Home and Finance Minister reflects the decline in the conduct of elected politicians. The Congress party will always stand by Chidambaram.

A statement from the CBI said, “A complaint has been lodged that a person from Chennai was paid a bribe of Rs. A case has been registered against 5 persons from Chennai, Mumbai and Punjab in this connection. The test was conducted at 10 locations in Chennai, Mumbai, Karnataka, Orissa, Punjab and Delhi. The complaint is being investigated. “

Congressmen gather in front of the house

Congress figures, including a wealthy MLA, gathered in front of Chidambaram’s house after learning of the CBI raid. At the time, the rich man told reporters that the trial was being held with the intention of political infighting and revenge.