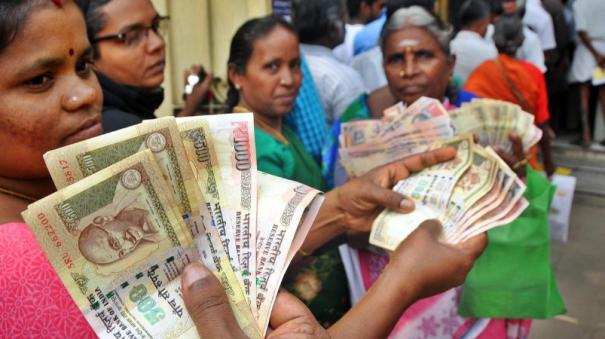 New Delhi: The Constitutional Bench of the Supreme Court, which said that the Central Government’s devaluation of currency in 2016 will continue, dismissed the petitions filed against the move yesterday. On the night of November 8, 2016, Prime Minister Narendra Modi announced that Rs.500 and Rs.1,000 notes will become invalid. As many as 58 petitions were filed in the Supreme Court against this sudden action of the central government, claiming that many people were affected.

A five-judge constitutional bench headed by Justice SA Nasir was constituted to hear these petitions. Justices PR Kawai, AS Bopanna, V. Ramasubramaniam and PV Nagaratna were present in this session. The verdict was delivered yesterday after various stages of investigation. 4 of the 5 judges in the constitutional session ruled that the central government’s currency devaluation will go ahead. But only Justice Nagaratna gave a different verdict. He said that the central government should have implemented the devaluation process through the law.

A period of 52 days is sufficient to convert the invalid Rs 500 and Rs 1,000 notes into legal tender following demonetisation. Therefore, it cannot be said to be unreasonable. Currently, the deadline cannot be extended. During the demonetisation drive of 1978, 3 days were given to exchange the invalid currency notes, and later the period was extended by an additional 5 days only. This was stated by the Constitution Bench of the Supreme Court. At the same time, Justice Nagaratna gave a verdict against the demonetisation move.

In it he said: The devaluation proposal is a plan of the central government. The opinion given in consultation with the RBI in this regard cannot be treated as a “recommendation” under Section 26(2) of the RBI Act. The central government’s demonetisation has created a very difficult situation for the public. In an issue of such national importance, Parliament cannot be kept aside. Before implementing the devaluation, there should have been debates in the parliament. Notification through the Gazette that the currency notes are invalid
Published and not executable. It should have been done by law. However, the intent of the move cannot be understated. It included many important aspects including elimination of black money and prevention of financing of terrorism. Judge Nagaratna said this in his judgment.