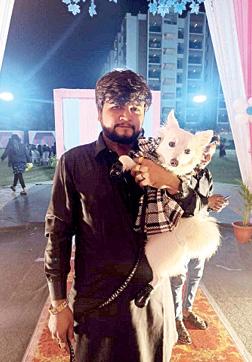 Ahmedabad: A pet dog’s birthday was celebrated in Ahmedabad, Gujarat at a cost of Rs 7 lakh. In this ceremony Corona Because the rules were violated 3 people arrested Were made.

Chirac Patel (24) hails from Krishna Nagar, Ahmedabad, Gujarat. His brother Urvish Patel (19). Their pet dog is Abi. A few days ago at the Open Air Mahal in Ahmedabad, they celebrated their dog’s birthday with much fanfare.

The brother and sister spent up to Rs 7 lakh for the dog’s birthday party. It was attended by a large number of people including relatives and friends. A concert was held, including a karpa dance.

Participants in the festival enjoyed singing and dancing without wearing masks and following social gaps. The video went viral on social media. Following this, the Nicole police in Ahmedabad registered a case and arrested Chirac Patel, Urvish Patel and their friend Divesh.

Commenting on this, Nicole analyst Jala said, “Across the state of Gujarat Corona The virus is spreading rapidly. Various restrictions have been imposed to prevent the spread of the virus. In this situation they have held a birthday party for the pet dog without getting proper permission. Participants in the ceremony Corona Did not follow the rules. We have arrested 3 people who conducted the ceremony due to this. ”All the 3 arrested persons were later released on bail.