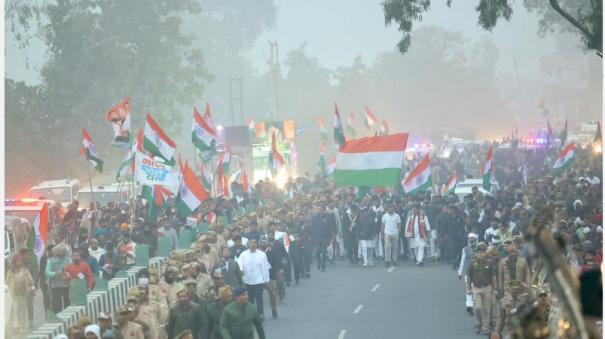 Rahul Gandhi’s India-wide unity yatra reached Uttar Pradesh on Tuesday afternoon. Acharya Satyendra Das, President of Ram Janmabhoomi, had given his blessings for the Yatra to be held in the state. In this situation, following him, Sampath Roy, Secretary of Ram Temple Foundation, also congratulated Rahul Gandhi on his pilgrimage.

He said, “A young man is walking for the country. I appreciate his effort. I don’t see anything wrong in it. I am an RSS worker. RSS has never condemned the India Unity Yatra. He is doing this walk even in this harsh weather. We should appreciate it. I would say that everyone in the country should undertake the yatra,” he said.

Earlier, Chief Guru of Ram Temple, Rahul Gandhi had wished him success in his yatra and long health and life. In a letter he wrote on Tuesday,
“You are working for a good cause. You are doing this for the benefit of the people, for their happiness, for the happiness of all, for the good of all. I wish that the blessings of Lord Rama be with you always,” he said.

Day Two in Uttar Pradesh: After a nine-day winter break, the Indian Unity Yatra, which started from Delhi on Tuesday, entered the state of Uttar Pradesh in the afternoon. Former president of RAW organization AS Dulat and Shiv Sena MP Priyanka Dwivedi participated in it. Congress General Secretary Priyanka Gandhi welcomed the Yatra which entered Uttar Pradesh earlier. Opposition Leader of the state Akhilesh Yadav and West Bengal Chief Minister Mamata Banerjee also expressed their support for the pilgrimage.

Meanwhile, Rahul’s India Unity Yatra began on the second day from Uttar Pradesh’s Mavikala village on Wednesday. The three-day pilgrimage in the state will re-enter Haryana on January 6. The pilgrimage will reach Kathua district of Jammu and Kashmir on 20th. It will then conclude on Jan. 30 in Srinagar.