Ruby Khan, who celebrated Vinayagar Chaturthi after switching to BJP in UP Aligarh, threatened 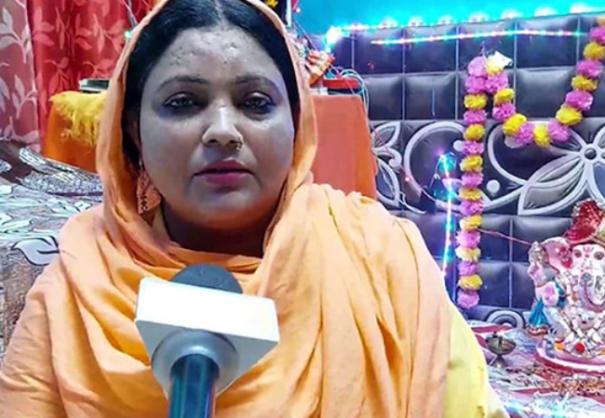 New Delhi: The number of Muslims joining the ruling BJP for the 2nd consecutive term in Uttar Pradesh is increasing. Along with this, they started worshiping Hindu gods for political gains.

In that way, Ruby Asif Khan, a resident of UP’s Aligarh city and the vice-president of Mahaveerganj BJP women’s wing, celebrated Vinayagar Chaturthi at her home on the 31st. She is performing pooja along with her husband Asif Khan with Ganesha idol.

According to Vinayagar Chaturthi rituals, Ruby Khan has also announced that after seven days, the image will be taken in a procession and dissolved in the nearby Ganga. The video he posted after recording this went viral on social media.

Subsequently, the Mufti of Moradabad, Arshad Baruqi, issued a padwa. In this he said, “In Islam, none should be worshiped except Allah. Especially among Muslims there is no place for idolatry. Therefore, those who worship gods of other religions are against Islam.

It went viral on social media and created controversies. Because Aligarh, a city in the western part of UP, was notorious for religious riots. Like BJP leader Ruby Khan, Aligarh’s Muslims never worshiped Hindu gods.

In this case, Ruby Khan complains that some Maulanas are threatening to kill her and her family.

Ruby Khan told the ‘Hindu Tamil’ daily, “Since I joined the BJP, all the Muslims here have been opposing me. Maulanas have threatened to kill me for celebrating Ganesha Chaturthi now.

They are not true Muslims. Fear of this will not leave Ganesha unmolested. Because, my husband is supporting my activities” he said.

Earlier, Ruby Asif Khan had performed pooja with images of Ram in his house at the foundation stone ceremony of the Ram Temple in Ayodhya. It may be recalled that journalists had previously complained that many people had threatened him.