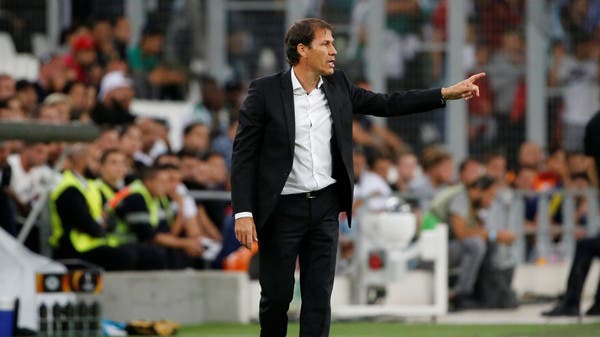 Rudi Garcia, the new coach of Al-Nasr, worked as a physiotherapist, performance analyst, media, and finally as a coach. His grandfather fled the Spanish Civil War, and was famous for his clashes with referees and the press. Mohamed Salah described him as exceptional. He was associated with a beauty queen and was not good at “pasta”.

Al-Nasr announced the signing of the French coach in the early hours of Wednesday, to succeed the Argentine Miguel Angel Rosso on the seat of the coach of the capital Al-Asfar.

Why is he called “Rudi”?

Rudy Jose Garcia was born to a Spanish expatriate who lived in France after his parents left the country in the midst of the Spanish Civil War. In 1966, he became a famous media after his retirement.

Corbye Eason… where it all began

When Jose Garcia became coach of Corbay Esson, who plays in the lower divisions in France, his son Rudy joined the team, and when he reached the age of 18, he joined Lille and occupied the position of attacking midfielder, and snatched his first goal with the team 3 expensive points from the heart of the Parc des Princes stadium of Paris Saint-Germain .

He moved from Lille to Cannes and then Martigues, then returned to his debut team Corbay Eason, where he played a double role as a player and coach, and then began with the Childhood Club his coaching career after two back and knee injuries forced him to retire at the age of 28.

After Corbay saved Eason from relegation and finished second in the following seasons, Rudy moved to Saint-Etienne where he worked as a physiotherapist and then as a performance analyst studying the team’s opponents and was promoted to assistant coach for the team with coach John Toshack.

Toshack left for Spain, specifically Real Sociedad, and Garcia took over the leadership of Saint-Etienne equally with Jean Wallem, but that duo did not work and Saint-Etienne was relegated to the second degree.

During his early years, Garcia worked in the press and media, as he was a reporter for the French channel “Canal Plus” and specialized in interviewing players after the end of the matches, and then moved as an analyst in the channel’s studios.

“Better than Mourinho and Ancelotti”

The Englishman Joe Cole spent a year under the leadership of Rudi Garcia after he was loaned from Liverpool in the 2011-2012 season. The Englishman, but I learned from Rudi Garcia in football techniques and plans what I did not learn from any of the previous coaches, yes he is that good.

He continued: I was in Lille, but I felt on the field that I was in Barcelona, ​​​​and that was thanks to the coach.

Protest against Juventus using the “violin”

Garcia took over the technical task for the wolves of the Italian capital Rome between 2013 and 2016, and during one of his team’s matches against Juventus, the referee awarded a questionable penalty for the “Bianconeri”. And his penalty was to complete the match from the stands of the stadium after the referee showed him the red card.

Garcia said after the match, angry: It is a shame that the penalty area here is 19 meters, then commented on the violin incident in an interview with Corriere dello Sport, saying: I cannot remain silent when I am subjected to injustice, and what happened there was a great injustice, I expressed my protest in a way Elegant, isn’t it? I leave you the explanation.

And before the price of the Champions League final 2019-2020 season, when Garcia was coach of Lyon, he told reporters during his return to the Juventus stadium to face the “old lady”: Do not worry, I left the violin in Italy.

Making fun of the paparazzi

Before hosting Bayern Munich in the group stage of the continental championship 2014-2015, Roma coach Garcia took a camera from a photographer at the press conference and mocked the way the cameras took his pictures, and he was apparently frustrated by the noise the lenses made while answering questions.

The Egyptian international Mohamed Salah, under the leadership of Garcia, played in Rome 21 meetings in all competitions in the last season of the coach and the first for the player with the capital team 2015-2016, scoring 6 goals and providing one assist.

Salah recalled his memories with his coach during an interview with the newspaper “L’Equipe” in 2018, and said: I remember our first meeting well, he is a very friendly and kind person, the way he deals with his players is exceptional, we did not work for a long time together, but I have to thank him because he helped me integrate into The team is fast, I didn’t even speak Italian, so I learned a lot from him.

Salah posted on Facebook in his farewell to his coach after his departure from Rome: Thank you, teacher.

“Training” ruined his marriage.. so he was associated with a beauty queen

Garcia has 3 girls, Lena, Carla and Eva, from his unfinished marriage to Veronica and the divorce was the end of it.

Garcia tells The Athletic: I lost my marriage because of this job, of course. I have a good relationship with my ex-wife, the older you get, the better you can control your life, but when I started my training career I worked 24 hours during the seven days, I was like a service restaurant Self is on a highway, always open and the problems are endless.

In September of the year 2014, the coach announced via Twitter his association with Francesca Prinza, the official TV presenter of AS Roma and a former beauty queen.

The French coach used to lead many charitable causes, for example he participated in a charity match for all donations to the French Alzheimer’s Association when he was coach of the night.

And to his friends.. an open-minded father.. his job forced him into the kitchen

Rudi Garcia is distinguished by his loyalty in his friendships, and he said in his interview with the official website of Roma Club: I do not have many friends from football, I only have two friends in France, one is a teacher and the other is a radiologist in France, I am very loyal to my friends because in their time of need they are always beside me.

Of his children he commented: I am not a strict parent, I taught my children to take responsibility for their actions, explain things to them and let them use their intuition to know what can and cannot be done.

On his ideal way to unwind from the stress of work: I like sitting at home and watching movies when I want to relax.

Rudy revealed that his job forced him to enter the kitchen: I am not a good cook because I have always been around a wonderful woman, but in this profession you are often alone, I learned how to make pasta, and eat it even if it is inedible, at least so that I do not die of hunger.

Finally, he pointed out the validity of a famous French rumor: Yes, the French do not like the capital, Paris, and we feel some antagonism with that city.