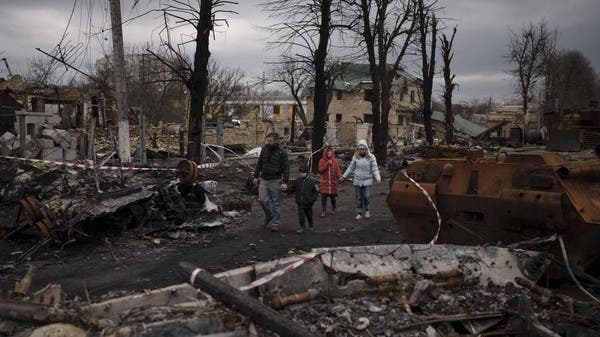 With the Russian military operation in Ukraine entering its 73rd day, today, Saturday, the Russian-Western debates about the bloody events that took place in the town of Bucha, near the Ukrainian capital, took a new turn after hints emerged of a role played by British intelligence in what was described as “fabricating” pictures with the aim of “Promoting a War Crime”. The Kremlin pledged to publish documents confirming the Russian view.

In conjunction with the escalation of controversy in the West over the establishment of a mechanism for documenting what is described as “war crimes” committed in Ukraine, and setting standards for investigation, Moscow leaked yesterday, data that state media said that Belarusian President Alexander Lukashenko had handed over to his Russian counterpart Vladimir Putin after the controversy erupted. about this issue.

The data indicated, according to what was reported by the newspaper “Al-Sharq al-Awsat”, that the Belarusian special services were said to have monitored them and handed over documents on them to the Russian side. Against the Russian military committing war atrocities.

Kremlin spokesman Dmitry Peskov was asked about this issue, and whether it had been discussed in detail during the recent talks between Putin and Lukashenko, and he replied that “the file was, of course, present, the two leaders touched on it,” and pledged to publish “information about those involved in the Ukrainian Bucha events. Peskov added: “This is well known, and enough details will emerge, about (what was promoted) absolute fiction, and plotted scenes.”

The Russian President had described the reports issued about the killing of civilians in the village of Bucha as “fake”, and said two days ago at a press conference that Lukashenko had handed him documents about this incident, adding that these documents “were handed over to the Federal Security Service, and contain information about who He organized this provocation, how it happened, and the means of transportation that were used to carry it out.”

In the same context, the Russian Foreign Ministry said yesterday that it had summoned Britain’s ambassador to Russia, Deborah Brunert, and strongly protested against Britain’s new sanctions against Russian media. The ministry said in a statement that Russia will continue to respond “cruelly and resolutely” to all sanctions imposed by London.

Britain imposed sanctions on journalists and media organizations earlier in May, in the latest package of measures aimed at increasing pressure on Moscow.