Russia warns of Ukrainian provocations in the Donbass chemical industry 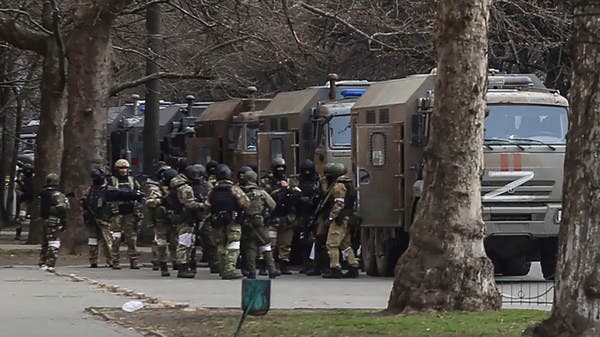 With the Russian military operation in Ukraine entering its 73rd day, today, Saturday, Russian forces continue to destroy Ukrainian military sites, while the West is preparing to adopt a new package of sanctions against Moscow in light of its escalation of military and moral support for Kiev.

In the latest developments, the Russian Defense Ministry announced that the Nazi formations and Kyiv forces were preparing provocations in an area where chemical industries are concentrated in Donbass, in southeastern Ukraine, “at the direction of their sponsors in the United States and Britain.”

Head of the Russian National Defense Control Center Lieutenant-General Mikhail Mezintsev said: At the sites of the “Azot” company in Severodonetsk, Lugansk People’s Republic, they have deployed heavy weapons, where they are holding more than a thousand factory workers and civilians as human shields, and at the same time the Nazis are systematically bombing the towns of Pervomaisk Stakhanov and Kalinov, to provoke the Russian forces to respond, with the aim of accusing the Russian army of killing civilians and causing a disaster, as he put it.

On the ground, the President of the Russian Republic of Chechnya Ramzan Kadyrov announced that the Kyiv forces had thwarted an attempt to launch a counterattack in the village of Voivodovka in Lugansk, inflicting heavy human and material losses on the attackers and destroying their command center.

The spokesman of the Russian Defense Ministry, Major General Igor Konashenkov, announced that Russian defenses had shot down a Ukrainian Su-27 plane and intercepted two Ukrainian “Smerch” missiles targeting the city of Izum in the Kharkov province.

In humanitarian terms, United Nations Secretary-General Antonio Guterres announced the evacuation of hundreds of civilians from the city of Mariupol in the Donbass region and its surrounding areas, during a humanitarian operation carried out in coordination between Russia and Ukraine.

Guterres said on his Twitter account yesterday, Friday, that about 500 people were evacuated by two convoys from Mariupol, especially the Azovstal steel plant, which is still the last stronghold of the Ukrainian government forces there, and the areas surrounding this city, within the framework of a successful operation carried out by the United Nations in cooperation with the Committee. International Red Cross.

“I hope that continued coordination between Moscow and Kiev will lead to more humanitarian pauses in order to provide a safe passage for civilians,” he added.

Since the start of the Russian military operation in Ukraine, Mariupol, the largest city overlooking the Sea of ​​Azov, has witnessed fierce battles, during which the forces of Russia and the Donetsk People’s Republic managed to control the entire city, except for the Azovstal plant.

Ukrainian officials have accused Russia of violating a ceasefire today aimed at evacuating dozens of civilians trapped underground in the bombed steel plant, after fighting thwarted efforts to rescue them the day before.