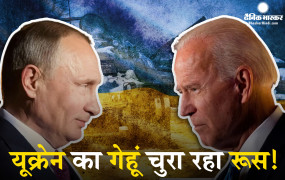 Digital Desk, Kyiv. The war between Ukraine and Russia is still going on. In both the countries, no one is taking the name of bowing down first. Many countries around the world also mediate to end the war peacefully, but neither Russian President Vladimir Putin nor Ukrainian President Volodymyr Zelensky showed interest. Although Ukrainian President Zelensky offered to talk to Putin about a ceasefire, Putin did not agree. By the way, apart from the loss to both the countries from the war, nothing has been achieved so far.

Ukraine had to suffer heavy losses in the war, while Russia had to lose its soldiers. The food problem in the world is increasing due to the ongoing war between Russia and Ukraine. The problem of inflation due to war has also come before the world. Meanwhile, the US has made serious allegations against Russia and said that Russia stole five tonnes of wheat from Ukraine. According to America, Russia is now selling this wheat to African countries. It is being told that the price of this wheat in the market is around Rs 778 crore.

America has made a big attack on Russia and said that Russia stole wheat from there in the midst of Ukraine war. It is being told that Russian trucks had gone to Ukraine, while returning, wheat was loaded on them. It is alleged that Russia has looted wheat from Ukraine and sent it to Crimea. Now this wheat is being sold to African countries suffering from famine. On the other hand, America has warned countries around the world that Russia is taking advantage of its circumstances by creating a situation of war in Ukraine.

Why are African countries compelled?

Significantly, African countries are dependent on Russia for weapons and other necessities. America says that African countries trapped between powerful Western countries and Russia are not able to protest on this matter. That is why Russia is taking advantage of these countries. About 40 percent of the total requirement of African countries comes from Russia and Ukraine. This year there has been a huge jump in the prices of wheat worldwide, which has increased to 23 percent. According to a United Nations report, 17 million people in Africa are facing a hunger crisis due to drought last year.

war became the cause of inflation

The war between Ukraine and Russia has been going on since February 24. Due to which inflation is increasing all over the world. Russia and Ukraine themselves are also facing problems related to food and drink. On the other hand, Western countries are helping Ukraine openly. America has already announced the supply of arms and essentials to Ukraine. Ukraine is getting full assistance from the western countries, due to which the war is going on for a long time.