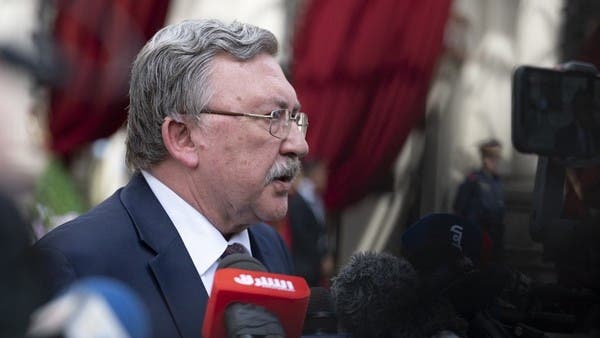 As the Austrian capital Vienna hosts the eighth round of nuclear talks on reviving the nuclear agreement signed in 2015 between Iran and world powers, the Russian envoy to the talks said on Tuesday that the working group had made progress “without dispute.”

To this, envoy Mikhail Ulyanov wrote on Twitter, “The lifting of sanctions is actively being discussed in the indirect talks.”

In the same context, Iranian Foreign Minister Amir Abdollahian said today, Tuesday, that the Vienna negotiations are on a good track, adding, “If the other parties in Vienna continue negotiations in good faith, the agreement can be reached in the near future.”

Meanwhile, diplomatic sources told Al-Arabiya and Al-Hadath that if an agreement is not reached within 4 weeks, this means that there will be no agreement.

The sources added that the beginning of next February appears to be a realistic date to end the talks, noting that Iran’s nuclear program is now not as it was a year ago.

She also added that the Iranians are negotiating seriously and want an agreement to sell their oil, but we do not know to what extent their ambitions.

From the Vienna Negotiations on Iran’s Nuclear Program

As for the issue of the guarantees demanded by the Iranians, the sources described it as complicated, “and we still don’t know how to get over it.”

Previously, six rounds of talks were held between April and June, before they were suspended for about five months, and resumed as of November 29. During the previous round, European diplomats spoke of “progress at the technical level”, warning that time was running out for the agreement.

On the other hand, Iran confirmed that the other parties agreed to add new observations and points raised by its negotiating delegation headed by Ali Bagheri, to the points discussed in the rounds between April and June.