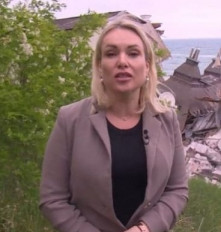 It is part of a criminal case against 44-year-old Marina for spreading false information about the Russian armed forces. According to the Interfax news agency, he could face five to 10 years in prison. His house was raided by security officials on Wednesday, following which he was arrested.

Maria Ovsyannikova worked for Channel One of Russian state television and was considered loyal to the Kremlin until an anti-war banner was placed above the camera in a news broadcast in March. The banner read, ‘Stop the war. Don’t believe in propaganda. You are being lied to here. He also spent several months abroad working for the German newspaper Die Welt.

In July, he again opposed the war near the Kremlin. Under Russian law, Moscow’s war on Ukraine could only be referred to as a special military operation, and penalties were made tougher in March for criticizing the military’s actions. Marina was given only a short sentence with fine till now, but now strict action can be taken against her.