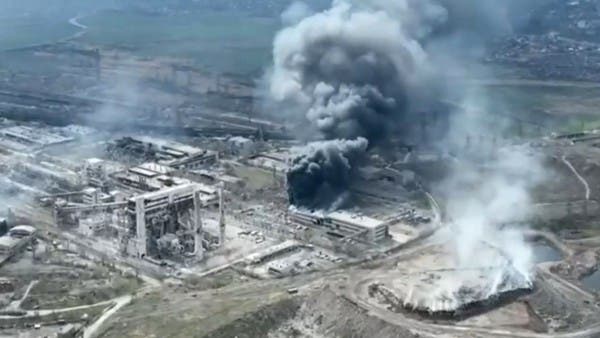 After the Kremlin confirmed that his country had no intention of storming it, the Russian army announced on Wednesday evening that it would stop firing in the vicinity of the Azovstal steel plant in the Ukrainian city of Mariupol for a period of 3 days.

In an online post, the army confirmed that it would open humanitarian corridors from the factory on Thursdays, Fridays and Saturdays, to allow civilians to leave the compound.

He also added that the corridors will be open from 0800 to 1800 Moscow time daily.

He also clarified that during this period, the Russian forces will stop any military activities and withdraw units to a safe distance.

Ukraine: We are communicating with the stranded

These developments came after an announcement, confirmed by the head of the Parliamentary Committee of the ruling party in Ukraine, David Arachamia, on Wednesday, that Russian forces had entered the territory of the Azovstal factory in the city of Mariupol.

Arachamia confirmed that the Russian intrusion attempts are still continuing for the second day, stressing that the Russian forces are already present in Azovstal lands, in an interview quoted by the “Free Europe” radio station.

He also added that contact is still going on between the Ukrainian authorities and the fighters in the factory, noting that it did not stop until Wednesday evening.

These statements came while the factory area is witnessing violent battles, as heavy artillery, tanks and aviation are participating in the operation, according to the Ukrainian version.

The Kremlin denies: We do not want to storm

However, the Kremlin on Wednesday denied the Ukrainian narrative, denying that Russian forces had launched an attack on the industrial complex in Mariupol, and stressing that they did not intend to storm it.

Russian presidential spokesman Dmitry Peskov told reporters that Moscow had publicly given the order on April 21, issued by the Supreme Leader, President Vladimir Putin, to cancel any incursion.

He stressed that the Russian forces are besieging the site, but they only intervene to prevent any sudden shooting from the Ukrainian fighters there.

Then the two sides exchanged accusations of violating the armistice, and not allowing the evacuation of civilians, before the efforts of the United Nations and the Red Cross produced a new batch a few days ago.