Safiya Al-Sayegh: I fell into a “black hole” after getting the Arab gold 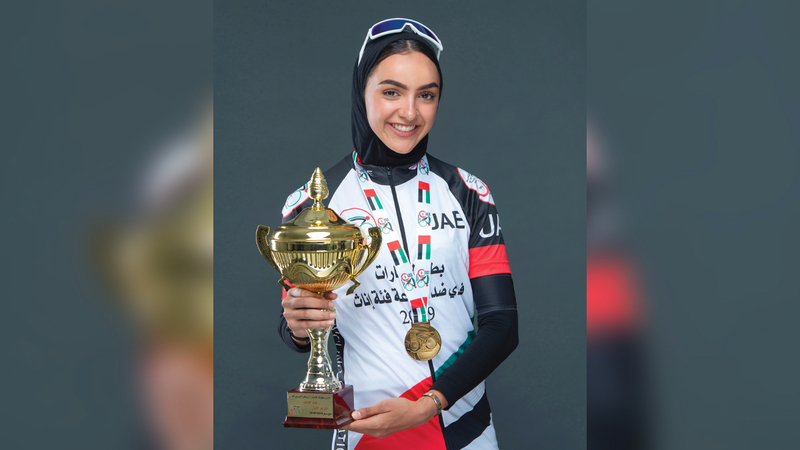 The Arab, Emirates and Asian bronze medalist, Safia Al-Sayegh, confirmed that her cycling career almost ended after winning the gold in the Arab U-23 Championship, which was held in Egypt last November, noting that she joined the UAE professional team and was chosen last January. In addition to winning the Asian bronze, they brought her back to life again.

Safia Al Sayegh, the UAE and Arab U-23 champion, joined the Emirates Professional Team to become the first player in the history of the UAE cycling to join a professional team and be the front of the Emirati bikes with the team in its external championships. An individual race against the clock, in the championship held last March in Tajikistan, and she had never dreamed of that, as she was a player and a lover of swimming until the age of 12.

And about the suffering that Safia Al-Sayegh experienced, before joining the Emirates team, she told «Emirates Today»: “I traveled with the national team to participate in the combined Arab championship in Egypt last November, and I neglected studies for a period of two weeks. Certainly, I could not combine attending the tournament and conducting special projects at the university.” For a long time, I was a student at the American University in Dubai, and during this period a lot of important academic matters accumulated, so after returning I stopped training for nearly a week, which is very difficult for a player competing in cycling to be away only two days and not a week.

And she added, “After this week, (Corona) hit me, which made me stay at home for another week, and here I felt that I fell into a (black hole) due to a very big drop in my level, and I lost my passion for the game, which made me very sad, and this affected my I was very emotional, until the news of my choice to represent the UAE girls in the professional team came last January, which made me go back and start focusing on training to restore the same level.”

Regarding the Asian bronze, Safia said: “I did not imagine that I would get a medal because of the lack of good preparation for the tournament, and the presence among champions with a great history on the continent, but luck played with me a little because of the small distance of the individual race against the clock, in which I got third place. And my level helped me to complete the race, and the surprise was to win and get third place. As for the road race, it was 110 km, in addition to the presence of hills, and I was basically not ready to participate, so I tried with the constellation and I was with them until the 40th kilometer before I lost my chance on one of the hills And miss the opportunity to compete a lot.”

Regarding her career in sports, Safia continued: “I did not imagine that I would play a game of bicycles, especially since I was a champion at the school level and in the school Olympics in swimming until the age of 12, but then I discovered that there are no competitions for an age older than 12 years, in addition to my father’s fear To join another team or academy that affects my level, which made me leave the game and turn to athletics, and then I saw the interest and invitation to join the cycling team, so I played this sport since 2016 until now.”

And about her feeling after winning the Asian medal, she said: “I did not imagine this love and joy from all the members of the mission, my family and friends, and everyone around me I saw talking about the achievement. I was really proud of that and I cannot describe my feeling, in addition to being the first Emirati to join the professional team. And this matter certainly makes things more difficult now, but certainly the ambition is different and there is a great desire to continue the journey and professionalism and achieve a world title with the professional team, and it will certainly be easier after completing my studies at the university.”

Safia Al Sayegh confirmed the great role played by the Emirati hero Youssef Mirza, who said: “He never left us and I trained with him and under his leadership for a long time. The history of Emirati cycling.

As for the completion of the Gulf Games in Kuwait and obtaining the full mark for the UAE girls, the Arab champion said: “We got the full mark and four golds for four races for girls, in addition to the general individual race in which we got the first three places. During the race I was working to get my friend, Sheikha Issa, to take the first place and protect her back, and I was very afraid at the last speed that someone would come from behind, and the goal was to get the gold medal only, but I was surprised to get second place, and I also found the rising champion Huda Hussein Khalfi, to get the top three places in the race.”

Safia Al Sayegh confirmed that she preferred to join the Emirates Professional Team, and attend with him in the Italian camp for three months, to join the Asian Track Championship, which the UAE recently participated in in India, due to the lack of good preparation for the track championship, and the absence of a track currently in the Emirates, as That there are no close entitlements to the track championships, unlike the road championship in which it will participate, in the coming period, by attending two championships, namely “Islamic Solidarity” in Turkey, and the World Championships in Australia, which made it prefer to prepare for the upcoming championships in the European atmosphere.

“Winning the Asian bronze medal and joining the Emirates team brought me back to life.”

“Youssef Mirza is a leader and a model for the best cyclist in the history of the Emirates, and I am trying to follow in his footsteps.”