Salman Al-Faraj in the current season.. more than 54 hours of play 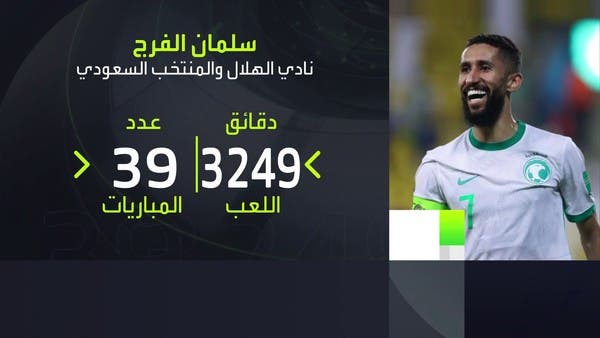 Salman Al-Faraj, the captain of the Saudi national team, is ahead of the rest of his international teammates, as he played 3,249 minutes with Al-Hilal during the current season, which represents 54.15 hours of football.

Al-Faraj played 39 games with Al-Hilal in the current season, which continues until the end of this month, and was succeeded by his colleague Ali Al-Bulayhi, who played 3,223 minutes, and Salem Al-Dosari, whose minutes amounted to 3,042.

Salman Al-Faraj played 6 fewer games than Lionel Messi, who played 46 games with Paris Saint-Germain and the Argentina national team, with 3862 minutes of play, while Poland’s Robert Lewandowski played 53 games with Bayern and his country, with 4367 minutes.