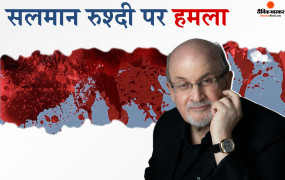 Digital Desk, New Delhi. English writer Salman Rushdie was attacked with a sharp weapon in New York City, USA. The attackers fired several shots at Rushdie, in which Rushdie was badly injured. Giving information to the media, the police said that Rushdie is currently kept on ventilator. According to the information received, the attack took place when Salman Rushdie was going to give a lecture at an event.

World leaders have expressed grief over the attack on Salman Rushdie. US Presidential Security Advisor Jack Sullivan from the US White House condemned the attack.

British Prime Minister Boris Johnson said it was an attack on freedom of expression.

UN Secretary-General Antonio Guterres expressed concern that violence as a reaction to freedom of expression can never be justified. Guterres wished Salman Rushdie a speedy recovery.

It is being told that the author has suffered a lot of injuries in the attack, in which he is afraid of losing one eye. The writer lost a lot of blood in the attack. The famous writer is currently in hospital, Salman Rushdie is undergoing treatment in the hospital.

USA New York Police have identified the suspected attacker as 24-year-old Hadi Matar, who is believed to be from New Jersey. The police have arrested the attackers.

Sharing information with the media, the police said that what we experienced today in Chautauqua is an event unlike anything in our nearly 150-year history. Our job right now is to remain a resource to the family of Salman Rushdie. We are working with the FBI to understand the purpose of this attack. New York State Police said we are providing most of the protection to the family.

What we experienced today at Chautauqua is an event unlike anything in our nearly 150-year history. Our job right now is to remain a resource to the family of Salman Rushdie. We are working with the FBI to determine the purpose of this attack: New York State Police, USA pic.twitter.com/zqPbt9jQoJ

The attacker is currently in custody: New York State Police

Salman Rushdie is undergoing treatment at the hospital. The suspect has been identified as 24-year-old Hadi Matar, a resident of New Jersey. We are in the process of getting the search warrant. FBI members helping us with investigation: New York State Police, USA