Sanaa..a new fuel crisis created by the Houthis and the government is commenting 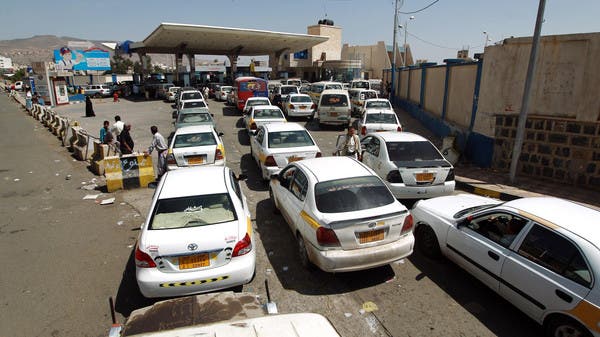 The oil derivatives stations in Sana’a, which are under the control of the Houthi militia, Iran’s arm in Yemen, witnessed a sudden return of long queues of cars and vehicles in front of gas stations, heralding a new crisis that compounded the suffering of citizens.

Local residents in Sana’a said that long queues of cars were seen in front of gas stations, after some stations closed their doors suddenly.

The Houthi crisis for oil derivatives came a month after the start of the UN truce, according to which the coalition allowed the entry of oil derivatives to the Houthi-controlled port of Hodeidah.

The Yemeni Minister of Information, Muammar Al-Eryani, considered the Houthi militia creating a new crisis, despite the continued regular arrival of oil derivatives ships to the port of Hodeidah at two ships per week, as “a continuation of its approach of trading in the suffering of citizens and restricting their livelihoods.”

Al-Eryani said, in a press statement, Tuesday evening, that the number of oil derivatives ships that unloaded their cargo at the port of Hodeidah from April 1 to May 8 reached (10) ships loaded with (268,911) metric tons, in addition to two ships loaded with 60,000. A metric ton of diesel has been granted permits, quantities that exceed the actual needs of the Houthi militia-controlled areas for 3 months, as he put it.

The Yemeni Minister of Information called on the international community, the United Nations, and the UN and US envoys to condemn the terrorist Houthi militia practices, which exacerbate the human suffering of millions of citizens, and empty the UN truce of its content.

He also called for pressure on the Houthi militia to direct the revenues of oil derivatives to disburse the salaries of state employees.

This fabricated crisis will exacerbate the difficult living situation of citizens who suffer as a result of the continuation of the war, the Houthi militia looting the salaries of employees for the seventh year in a row, the increase in unemployment and the lack of sources of income.

The Yemeni Foreign Minister, Ahmed bin Mubarak, accused the Houthi militia of obstructing the implementation of the UN truce, stressing that its priorities are “to collect funds to finance the war machine and enrich its leaders at the expense of torturing the Yemeni people.”

Bin Mubarak revealed that the Houthi militia “reaps 90 billion Yemeni riyals from oil derivatives during the two months of the truce and evades the obligation to pay employees’ salaries.”

He stressed, “the government’s commitment to facilitate the entry of derivatives ships according to the agreement and in a smooth manner.”