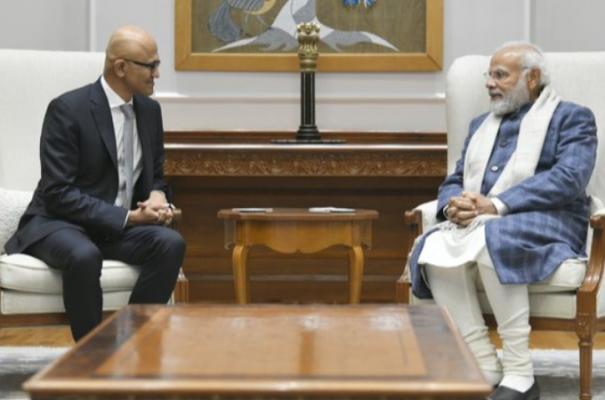 New Delhi: Microsoft Chairman and CEO Satya Nadella is on a four-day visit to India. He has been meeting and interacting with important leaders, entrepreneurs, teachers and students.

Yesterday, on the third day of his visit to India, he met and interacted with Prime Minister Narendra Modi in person.

Regarding this meeting, Satya Nadella said on his Twitter page, “The central government’s focus on inclusive sustainable economic growth through digital infrastructure is a great encouragement. We want to contribute to India’s digital journey.”

Regarding this meeting, Prime Minister Modi said on his Twitter page, “India is a role model in technology and innovation. Indian youth have ideas that have the power to change the world.”

Satya Nadella, who attended different meetings over the last three days, spoke about India’s technology infrastructure, Microsoft’s investments in India, and the changes that modern technologies such as artificial intelligence and cloud computing will make in the world:

“India’s digital infrastructure is excellent. India is among the top 10 countries in the world in technology spending. Digital technologies play an important role in India’s economic growth. In that way, Microsoft considers India as an important area. India has one of the largest development centers of Microsoft. Also, we have invested in setting up huge data centers in India.

Technology enables inclusion of all people. It helps bring out the individuality of everyone. Inclusive development is now paramount. Our development should be in harmony with the rhythm of the earth so as not to harm the environment.

By 2025, most apps will run in Glot mode. In that way, Glot technology will make a huge difference in the course of the world.” Thus he spoke.

A memorandum of understanding was signed between ISRO and Microsoft yesterday to develop space technology. A large number of start-up companies are foraying into space-based technology development in India. In this case, this agreement has been made to provide necessary technical assistance to those companies.

Last Wednesday, Satya Nadella attended a technology conference in Bengaluru. Chat then interacted with the GBT robot, which is based on artificial intelligence technology. He asked the robot what breakfast foods will be popular in South India in the future. And the robot came up with a list. It lists biryani along with usual breakfast items like idli, dosa, vada. Immediately, Satya Nadella jokingly said, “You should not insult a Hyderabadi by calling biryani as breakfast”. The robot apologized saying “I’m sorry”.