Saudi Ambassador to Vienna: We discussed with the US envoy our security concerns over Iran’s nuclear 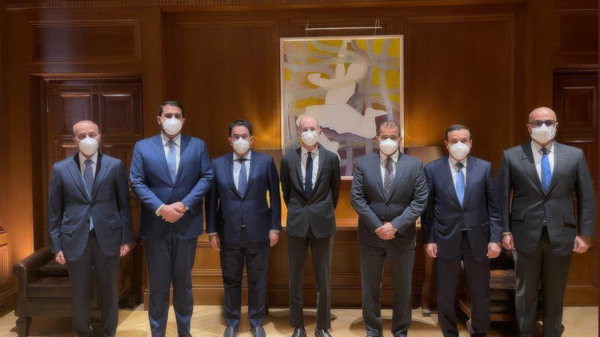 The Saudi ambassador to Vienna, Prince Abdullah bin Khalid bin Sultan, said today, Wednesday, that during a meeting of the ambassadors of the Gulf Cooperation Council countries with the US special envoy to Iran Robert Malley, he emphasized “security concerns” about Iran’s nuclear program.

Today I had the pleasure of hosting my brothers the ambassadors of the Gulf Cooperation Council countries and the permanent delegates of international organizations in Vienna with a meeting with Mr. Robert Malley, the US special envoy to Iran. pic.twitter.com/uYWTsahvaS

The ambassador added, through his official account on Twitter, that he and the Gulf ambassadors also stressed concern about “Iran’s interference in the region to destabilize security through its support for terrorist militias.”

To this, Washington announced, on Wednesday, that the negotiations in Vienna had recorded little progress. US State Department spokesman Ned Price said in a daily press briefing that negotiations are continuing in the Austrian capital, and that “slight progress” has been recorded in recent days.

This comes as the head of the National Security and Foreign Policy Committee of the Iranian parliament, Vahid Jalalzadeh, revealed that the countries of the 4+1 group proposed a temporary agreement during the Vienna talks that paves the way for reaching a permanent agreement on the Iranian nuclear program, adding that Tehran did not object, but it also did not agree yet.

He also clarified that this proposal is “under study”. In statements reported by IRNA today, he stressed that concluding a “temporary” agreement does not harm the nuclear agreement. However, he added that his country’s priority remains to reach a permanent agreement.

It is noteworthy that Tehran has been engaged in talks since last April (2021) in Vienna with the major powers to revive the agreement on its nuclear program signed in 2015.

While the United States, which unilaterally withdrew from the agreement in 2018, participates indirectly in the rounds, which have reached 8 so far.

During the past days, the statements of those involved in the negotiations reflected some progress, with an emphasis on the persistence of differences between them on various issues, amid growing concern about the acceleration of Iranian steps on the “nuclear” level.