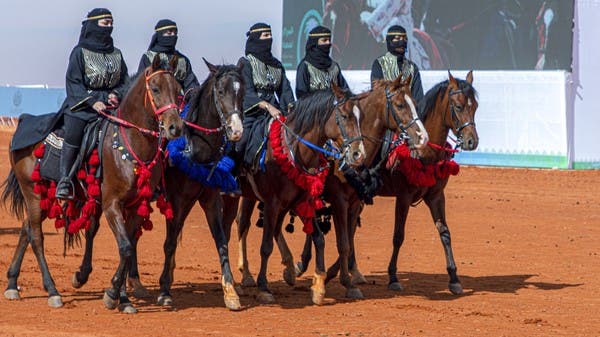 In the midst of a heavy female presence, the attendees of the King Abdulaziz Camel Festival enjoyed the performances of the first run for women for the first time in the history of the festival, where the individual women’s race dedicated to maghatir of all colors was held, and they competed for advanced positions in this race, in order to register their names in the first women’s race for camels.

Saturday witnessed the entry of the individual participating in the women’s open run, which was developed within the competitions of the King Abdulaziz Camel Festival in its sixth edition, held in the southern yards.

From attending the women’s session

While the individual women participating in the round reviewed before the final jury and the audience of the stands today, Saturday, to crown the winners, and the number of participants in the women’s round amounted to 38, which is an encouraging run in the category of individual players, and each participant participates in one individual, and upon the initial screening, 10 participants who were qualified He presented them to the jury, and then won 5 first places.

The women’s participation in the festival aimed to spread the concept of Saudi women’s participation in traditional dress, as well as provide challenges and strong competitions among the participants, and enable women to participate in the purifiers, whether it was the king’s sword, the founder’s flag, the club’s cup or the elite of the elite, and the method of arbitration is different with the same standards Beauty, and it is not a condition that the specifications be strong, and there were several activities, including women’s folk dress and Bedouin dress, and a group of women interested in folk dress and traditional dress and some officials present in certain destinations were invited.

Who attended the women’s session

The biggest festival of its kind

While the performances of camel and jockeys were attracted within the events accompanying the King Abdulaziz Camel Festival in its sixth edition, where the Saudi capital, Riyadh, hosts the largest festival of its kind in the world, which specializes in camels and their beauty marks, bringing together major owners from Saudi Arabia, the Gulf states and Arab countries, and some participants from countries around the world. Such as the United States of America, Russia and France, and it is likely that a number of owners who own about 33,000 boats will participate in the festival.

The huge festival, built on an area of ​​32 square kilometers and located about 100 km northeast of Riyadh, is accompanied by entertainment and cultural shows that make it a global carnival, in which about five thousand people work, and it is intended for tourists from different countries of the world, with numbers exceeding 100,000 daily visits.

The King Abdul Aziz Camel Festival also creates a tremendous movement at the economic levels by containing popular markets specialized in the exhibits of productive families, in addition to a market for buying and selling camels, which is considered the largest in the Gulf region in terms of deals and financial circulation with a total close to three billion riyals, or through cultural aspects. The source of the heritage and human originality of arts and heritage.

The festival includes activities in poetry, theater, singing and entertainment that cater to all ages.