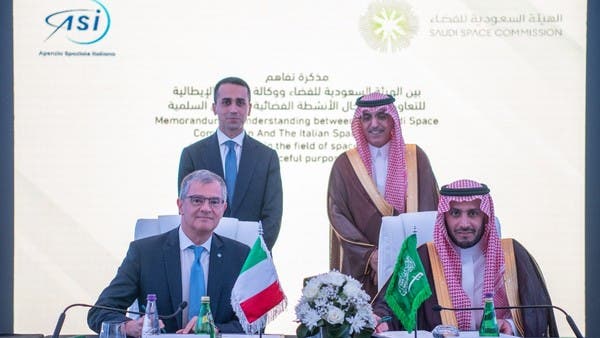 The work of the 12th Saudi-Italian Joint Committee was held in Riyadh today, Monday, within the framework of bilateral relations between Saudi Arabia and the Republic of Italy, and in the presence of Finance Minister Mohammed bin Abdullah Al-Jadaan, head of the Saudi side in the Saudi-Italian Joint Committee, and Italian Foreign Minister Luigi Di Maio.

The session’s work dealt with several topics, most notably the space file, where the CEO of the Saudi Space Authority, Dr. Muhammad Al-Tamimi, and the head of the Italian Space Agency, Giorgio Sacuccia, participated in a speech on the most important strategic directions of the two countries in the space sector.

A memorandum of understanding was also signed between the Saudi Space Authority and the Italian Space Agency, in the field of the peaceful use of outer space, aimed at providing a framework for cooperation in space activities, reviewing areas of common interest in the peaceful uses of space, and facilitating the exchange of information, technologies, and individuals working in areas of common interest.

The memorandum was signed on behalf of the Authority by CEO Dr. Muhammad Al-Tamimi, and on behalf of the Italian Space Agency, President of the Agency Giorgio Saccuccia. The memorandum aims to develop bilateral cooperation between the two sides in capacity-building in the field of space science and engineering and work to enhance the role of scientific missions and manned flight programs, in addition to developing cooperation Earth observation, space application data, and satellite manufacture and launch.

The signing of this memorandum comes within the framework of the efforts of the Saudi Space Authority to localize technologies and industries and the sustainability of qualitative space systems in the Kingdom, in accordance with the objectives of the Kingdom’s Vision 2030, and the Kingdom’s endeavor to develop the space sector and its technologies.

It is noteworthy that the memorandum of understanding signed between the Saudi Space Authority and the Italian Space Agency comes as a continuation of the joint cooperation between the two countries in various fields and sectors, which will contribute to strengthening the role of the economic and technical space sector and the status of the two countries at the regional and international levels.