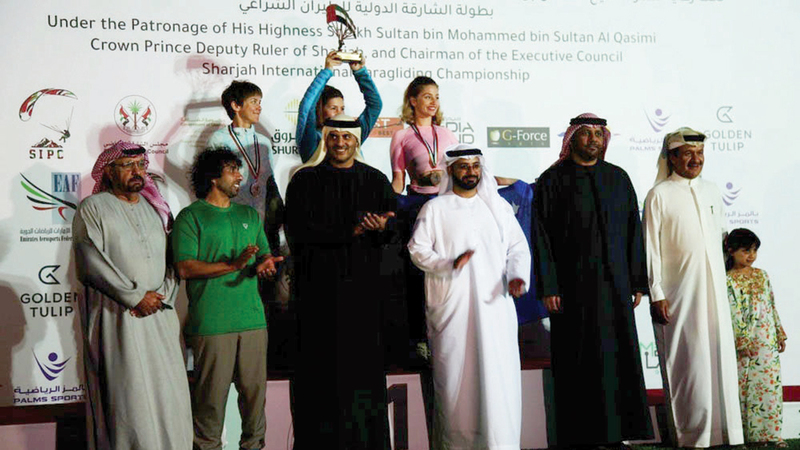 Saudi Arabia won the title of the fourth edition of the Sharjah International Paragliding Championship, whose competitions were closed the day before yesterday, under the patronage of His Highness Sheikh Sultan bin Muhammad bin Sultan Al Qasimi, Crown Prince and Deputy Ruler of Sharjah and Chairman of the Executive Council.

The Saudi team was able to win first place and the gold medal with 197 points, while the Albanian team came in second place with 268 points, while the joint team from Russia and Belarus came in third place, achieving 272 points and winning the bronze medal.

On the men’s singles level, the Belarusian Yoheni Vikhor scored 18 points, won the championship cup and gold, and the Russian Nikita Melnikova finished second with 20 points and won the silver medal after being equal in points (20 points) with his colleague Edward Dassi, who finished third after resorting to a jump. extra.

In terms of women, Bulgarian Lydia Dezhernova took the lead with 310 points, followed by Russian Anastasia Zubkova in second place with 1412 points, then Albanian Bora Morena third with 1615 points.

For his part, Sheikh Salem bin Muhammad Al Qasimi, Director of the Sharjah Commerce and Tourism Development Authority, expressed his happiness with the technical and organizational success achieved by the championship and the promotion of tourism in the UAE in general and Sharjah in particular.

He said in a press statement: “The championship is one of the most successful events in Sharjah, not only because of the number of participating pilots, but also because it is a source of attraction for the public and visitors as well. To the family of the Emirates Air Sports Federation and the Organizing Committee of the Championship.