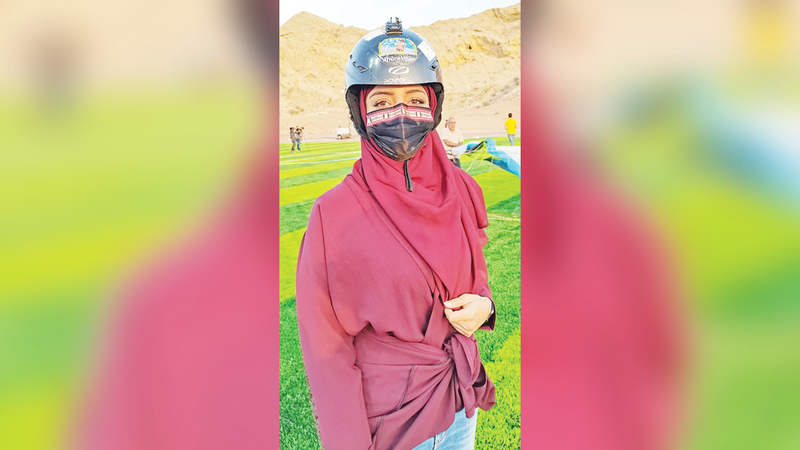 Attracted the participation of the female component in the fourth edition of the Sharjah International Paragliding Championship, which was held under the patronage of His Highness Sheikh Sultan bin Muhammad bin Sultan Al Qasimi, Crown Prince, Deputy Ruler of Sharjah and Chairman of the Executive Council, over a period of three days, with the participation of 60 pilots from 20 countries. On yesterday’s competitions, all eyes are on their first appearance in that tournament. The Saudi participant, Nihal Ali Al-Hilal, who is competing in her first international competition outside Saudi Arabia, drew attention to her in her first appearance in an international tournament.

Nihal Ali Al-Hilal works as a “kindergarten teacher”, while she broke into the field of paragliding three years ago, by representing the Asir Air Sports Club at the level of local championships only.

Her external appearance was limited to a number of external camps, which were not many, she said, the last of which was in Slovenia, to prepare for the Sharjah International Championship.

Nihal Al-Hilal said: “It is a pleasure to be present in a world championship organized by the Emirate of Sharjah, with the participation of a large number of world champions in the field of paragliding, which contributes to the development of my level on a personal level.”

And she added, in press statements: “Gliding has become one of the sports that is widely spread in the Kingdom of Saudi Arabia, and it is a hobby that girls have become accepted just like men, but at the same time it requires a mixture of patience and endurance and also in return gives its practitioners a mixed feeling of fun, adventure and risk.” ».

She indicated: «I decided to break into this field and join the Asir Air Sports Club, which includes a group of the most prominent workers in this field. And about her evaluation of her first experience with the Sharjah International Paragliding Championship

She said: «It is a good thing for the Gulf girl to go out to appear on such major occasions. The experience is really fruitful at all levels, and the organizers of the Sharjah Championship have rightfully provided an ideal organization at all levels, whether in terms of providing the element of safety or choosing the location for holding the tournament, which is a unique place because it It is difficult to find these colorful mountains alongside the systems and laws that govern the tournament.

On its last day, the championship witnessed an exciting competition, and the struggle for the title was limited to five pilots. At the end of the three rounds, the Belarusian Yohini Vikhor took the lead with 14 points, followed by the Bulgarian Yasin Nesheev in second place with 15 points, then the Russian Melnikov came third with 16 points. Then the Turkish Erton Bayrak, fourth, with 22 points, then the Albanian Blerian Bras, fifth, with 71 points.

Bochura! Is it something else?- New problem in South Africa’s World Cup qualification

‘There is no debt free farmer in Telangana.. My first signature is on that file..’

‘Ñañita’ revealed hard moments together with Dilbert Aguilar: “He was out of work, we started from scratch”

Encrypted communication of criminals intercepted again, dozens of arrests made