Saudi Arabia .. Waiting moments for the result of a cochlear implant operation for a child 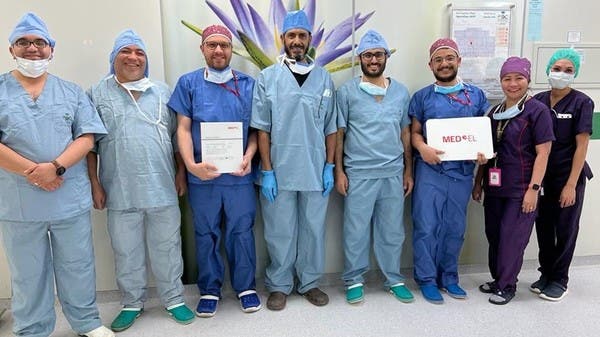 With feelings of joy and celebration, the medical team received the success of the cochlear implantation operation at King Khalid Hospital in Najran, after this joy culminated in the child and my grandfather being able to hear voices and the appearance of signs of joy and happiness on his face in breathless moments for the medical team, consisting of Dr. Ali Mahdi Al-Qannas, head Ear, Nose and Throat Department, Dr. Ahmed Aqil Al-Arqbi, Consultant of Ear Microsurgery and Cochlear Implants, Dr. Faisal Masoud Al-Qahtani, Head of the Department of Anesthesia and Operations, Abdullah Hussein Abdali (Operational Technician), Laila Hussein Awaji (Operational Nursing), Dr. Ibrahim Abdel Hamid, Audiology Consultant, and Dr. Ibrahim Khadad, rhinoplasty specialist and authorized.

For his part, Dr. Ali Qannas, a consultant otolaryngologist, described these moments to “Al Arabiya.net” as critical moments due to the state of anticipation for the outcome of the operation and the child’s ability to hear surrounding sounds.

He said that the most beautiful thing about this story is that such operations are provided free of charge to citizens, as cochlear implants are known as one of the costly operations.

He added, “We are proud of the presence of these operations in our dear country and the free medical services that the citizen enjoys that achieve his ambition and the aspirations of his children for a dignified life, and this is what the government of the Custodian of the Two Holy Mosques and his Crown Prince provided to the people of the Kingdom.”

He also revealed that the child Wajdi is 4 years old and suffers from complete congenital deafness in both ears, adding that the beginning of treatment was through doing a CT scan of the child’s cochlea to prove its safety and the integrity of the auditory canal and the brain center in preparation for cochlear implantation and it was healthy and after pre-qualification for cochlear implants for a period of time. 3 months to put headphones behind the ear to get used to cochlear implants.

He pointed out that the operation took place a month ago, after making sure that 12 electrodes were stimulated in each implant in each ear, and their test was sound, and the cochlea was turned off until the wounds healed.

He also added, “The child remained for a day and then was discharged from the hospital without complications, and after three weeks the child came to the hospital in the presence of surgeons, audiologists and company technicians to operate the cochlear, and the response was successful in the ears on all frequencies, and now we begin the journey of rehabilitation and education to rehabilitate speech and communication.”