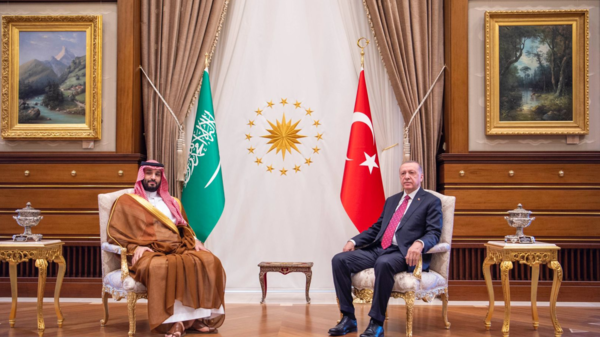 The Saudi Crown Prince, Mohammed bin Salman, left Turkey on Wednesday evening, and Turkish President Recep Tayyip Erdogan was at the head of his depositors.

Today, Wednesday, the Saudi Crown Prince and the Turkish President held a bilateral meeting at the Presidential Complex in Ankara.

Prince Mohammed bin Salman arrived in the Turkish capital, the third stop of his official regional tour in the region, which began in Egypt and Jordan, where he was in the forefront of his recipients upon his arrival at the Presidential Palace in Ankara, President Erdogan, and an official reception ceremony was held for him.

The Saudi Crown Prince concluded his regional tour through his third stop in Turkey, where he held talks with the Turkish President at the Presidential Palace in the capital, Ankara, on political and economic files. The official visit also witnessed the signing of agreements in various fields.

The main agenda of the talks centered on the economy, where they discussed steps that should be taken to increase cooperation between Riyadh and Ankara in various fields from trade to tourism, and from health to defense industries. Several agreements were signed between Turkey and Saudi Arabia during the visit.

A joint closing statement was issued for the visit of His Royal Highness Prince Mohammed bin Salman bin Abdulaziz Al Saud, Crown Prince and Deputy Prime Minister, to the Republic of Turkey, the text of which follows:

During the talks, bilateral relations between the two countries were reviewed from various aspects, and their common determination to enhance cooperation in the bilateral relations between the two countries was confirmed in the strongest possible terms, including in the political, economic, military, security and cultural fields. The two sides exchanged views on the most prominent regional and international developments of common interest.
The two sides discussed ways of developing and diversifying intra-trade, facilitating trade exchange between the two countries, overcoming any difficulties in this regard, and intensifying communication between the public and private sectors in the two countries to discuss investment opportunities and translate them into tangible partnerships in various fields, praising the great economic potentials of the two countries as members of the Group of Twenty. The opportunities offered by the Kingdom’s Vision 2030 in the fields of investment, trade, tourism, entertainment, development, industry, mining, construction projects, transportation and infrastructure (including contracting), agriculture, food security, health, communications and information technology, media, and sports And they agreed to activate the work of the Saudi-Turkish Coordination Council, raise the level of cooperation and coordination on issues of common interest, and work on exchanging experiences between specialists in the two countries.
The two sides expressed their aspiration to cooperate in the fields of energy, including petroleum, refining and petrochemicals, energy efficiency, electricity, renewable energy, innovation and clean technologies for hydrocarbon resources, low-carbon fuels and hydrogen, and to work on localizing energy sector products and associated supply chains, and developing projects related to these fields. .
In the field of environment and climate change, the Republic of Turkey welcomed the Kingdom’s launch of the “Green Saudi Arabia” and “Green Middle East” initiatives and expressed its support for the Kingdom’s efforts in the field of climate change through the application of the circular carbon economy approach, launched by the Kingdom and endorsed by the leaders of the G20 countries. The two sides reiterated the importance of adhering to the principles of the Framework Convention on Climate Change and the Paris Agreement, and the need to develop and implement the climate agreement by focusing on emissions without sources. The two sides affirmed their support for the two initiatives launched during the Kingdom’s presidency of the G-20 summit meetings 2020, namely (the global initiative to reduce land degradation and enhance the conservation of terrestrial habitats) and the initiative (the platform to accelerate research and development in the field of global coral reefs).
The two parties agreed to develop productive and investment partnerships in the fields of artificial intelligence, digital technologies and smart cities, and to encourage private sector actors working in these areas to cooperate.

The Turkish side called on investment funds operating in the Saudi entrepreneurship environment to invest in emerging companies in Turkey, and to establish partnerships with them.
The two parties agreed to strengthen and continue the relations between the “Turkish Standards Institution” and the “Saudi Standards and Metrology Organization” within the framework of the cooperation agreements signed between the two concerned institutions.
The two parties agreed to exchange visits of scientists, within the framework of the cooperation protocol signed between the Scientific and Technological Research Council of Turkey “TUBITAK” and “King Abdulaziz City for Science and Technology” in 2016.
The two parties stressed the need to strengthen and develop cooperation activities between the Small and Medium Enterprises Development and Support Administration in Turkey and the General Authority for Small and Medium Enterprises in the Kingdom of Saudi Arabia.
In the defense issue, the two sides agreed to activate the agreements signed between the two countries in the fields of defense cooperation, and to strengthen and develop them in a way that serves the interests of the two countries and contributes to achieving security and stability in the region.
The two parties agreed to enhance judicial cooperation and work on exchanging experiences between specialists in the judicial and judicial fields.
The two sides stressed the importance of cooperation in the field of tourism, developing the tourism movement between the two countries, exploring the tourism potentials of each country, and strengthening joint work for the benefit of the tourism sector and its development according to the bilateral agreements signed between the two countries.
The two parties stressed the importance of enhancing cooperation between the national civil aviation authorities, and facilitating administrative procedures for the operations of airlines.
The two parties agreed on their intention to develop the existing cooperation between the two countries in the field of health. The two parties will explore opportunities for cooperation in the field of health investments.
The Saudi side expressed its gratitude for Turkey’s support for Riyadh’s candidacy to host Expo 2030.
The two parties affirmed their endeavor to intensify cooperation, coordination and exchange of views on important issues and issues on the regional and international arenas, in a way that contributes to supporting and strengthening security and stability in the region. And support for political solutions to all crises in the countries of the region, while emphasizing not to prejudice the sovereignty of any of them, and seeking everything that would keep the countries of the region away from tensions, and lay the foundations for security and stability in them.
The two parties also affirmed their determination to increase cooperation and effective coordination between them within the framework of regional and international organizations, particularly the Organizations of Islamic Cooperation and the United Nations. And to continue their close cooperation to ensure peace, stability and security in the region.
His Royal Highness Prince Mohammed bin Salman Al Saud expressed his thanks for the hospitality of the President of the Republic of Turkey, Recep Tayyip Erdogan, as well as the intimacy and love that prevailed during the visit of His Highness and the accompanying delegation.
The President of the Republic of Turkey valued the Kingdom’s efforts in organizing the Hajj season for the past year 1442 AH, despite the challenges caused by the Corona pandemic, and its efforts to serve the Two Holy Mosques and their pilgrims, pilgrims and visitors, expressing his satisfaction with the increase in the number of pilgrims and pilgrims this year, and thanked the Custodian of the Two Holy Mosques King Salman bin Abdulaziz Al Saud and Crown Prince Mohammed bin Salman Al Saud for their efforts in this regard.

At the conclusion of the meeting, the two sides affirmed their determination to continue developing cooperation on the basis of historical brotherhood, to serve the common interests of the two countries and peoples and the future of the region for the benefit of all.

The Saudi Crown Prince began his tour, on Monday evening, which includes Egypt and Jordan, and concluded in Turkey.

The Jordanian monarch stressed the pivotal role of Saudi Arabia, led by King Salman, in supporting the nation’s causes, while Prince Mohammed bin Salman stressed the Kingdom’s keenness to consolidate brotherly relations with Jordan, pointing out that the goal is to push for a new phase of cooperation for the benefit of Jordan and Saudi Arabia, and that there are great opportunities. In Jordan, it will benefit both countries.

President Sisi affirmed keenness to continue strengthening consultation and coordination with the Saudi King and the Crown Prince on various issues of common concern, as well as issues of bilateral cooperation, within the framework of the historical and strategic relations between Egypt and Saudi Arabia, which reflect the common political will and unity of destiny.

The Saudi Crown Prince affirmed that his visit to Egypt comes as a consolidation of the distinguished relations between the two brotherly countries and the continuation of the pace of periodic and intense consultation and coordination between Egypt and Saudi Arabia on regional issues of common concern, reflecting the two countries’ commitment to deepening the firm strategic alliance between them, and enhancing the unity of the joint Arab and Islamic ranks. In the face of the various challenges facing the region at the present time, he expressed his aspiration that this visit would add an additional impetus to the solid and extended ties that unite the two countries at the official and popular levels.

The visit of the Saudi Crown Prince to Egypt included the signing of a number of agreements, and the conclusion of deals between the private sector in the two countries, at the headquarters of the General Authority for Investment and Free Zones.