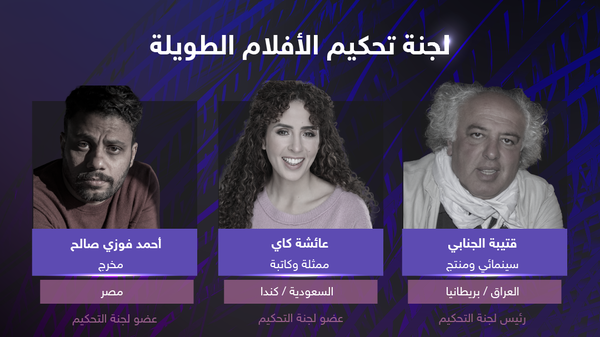 The Organizing Committee of the Saudi Film Festival announced the names of the judging committees in the competitions for feature films and short films, and the unimplemented scenario, for the eighth session, which will start on the second of next June and will continue until the ninth of it, organized by the Cinema Association, in partnership with the King Abdulaziz Center for World Culture (Ithraa). With the support of the Film Commission of the Ministry of Culture, the jury includes a number of academics, Gulf, Arab and foreign artists.

The jury for feature films is chaired by Qutaiba al-Janabi, an independent Iraqi filmmaker and producer. He holds a PhD in the study of cinema in the Arab world. He worked as a director and producer for MBC and as a photographer for documentaries at the British Opera. He also worked as Director of Photography for seven feature films, and directed and produced a number of award-winning short films at international festivals.

– Aisha Kay: A Saudi/Canadian actress and writer, holder of a master’s degree in writing, who played major and supporting roles in short films and series, leading to the main role of the Canadian feature film “The Jasmine Road” in 2020, for which she was nominated for three awards, and subsequently joined the Actors Syndicate. Canadian.

The short film jury is chaired by Moroccan-American director and author Hakim Belabbas, who holds a master’s degree in cinema from Columbia University in Chicago, has written and directed many fiction and documentaries.

– Ilham Al-Ali: A Saudi artist, holder of a Bachelor’s degree in Business Administration. She studied theater and its arts, participated in many series, won several awards in theater and television, and participated in many short and long films in the Gulf and internationally. She moderated the opening night of the Middle East and North Africa Film Festival in Vancouver, Canada in 2021, and received certificates of participation in two mentor programs for actors.

Ayten Mutlu Saray: A Swiss director and lecturer specializing in culture and cinema, and director of the del aube festival in Basel, Switzerland, she has shown her work in major festivals including Cannes, Rotterdam and Locarno, and has received many international scholarships in the world of cinema.

The script jury is chaired by the Saudi director and screenwriter Abdulmohsen Al-Dabaan, who directed many short films and television series, directed the feature film “The Last Visit” in 2019, and participated in many film festivals.

– Muhammad Al-Harz: A Saudi poet and critic. In his critical readings, he worked on monitoring the cultural scene in the Kingdom of Saudi Arabia, and issued several collections of poetry and critical studies.

– Dia Youssef: artist, writer, and independent film director, and one of her most prominent works is the three-award winning movie “Weld Sidra”.