Saudi Minister of Industry to Al Arabiya: The Kingdom will become a major engine for regional mining 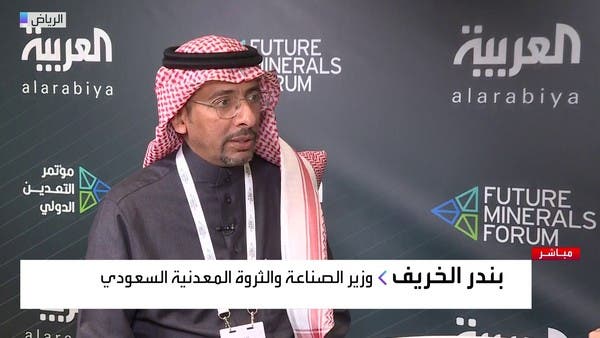 In an interview with “Al Arabiya” on the sidelines of the International Mining Conference, in Riyadh today, Wednesday, Saudi Minister of Industry and Mineral Resources Bandar Al-Khorayef affirmed that the Kingdom is working to make the mining sector a third pillar for national industries, stressing the importance of holding the conference in consolidating efforts, so that the Kingdom will be A major driver in the development of the mining industry at the region level.

Al-Khorayef indicated important steps for the development of the mining sector at the level of the Kingdom, including the licensing of more than 1967 licenses for reconnaissance and detection.

He explained that 25% of these granted licenses were granted during 2021, noting that the number of reserved complexes and mineral reserve areas in the Kingdom amounted to 431 sites.

During the special interview, Al-Khorayef reviewed major steps taken by the Kingdom at the level of the mining sector, including the largest geological survey of the Arab Shield region, in addition to issuing decisions related to the largest allocation of mining reserve sites with an area of ​​about 4,000 square kilometers, to develop the mining sector within the “Kingdom’s Vision 2030.” .

He pointed out that Vision 2030 aims to expand the economic base by transforming the Kingdom into a leading industrial power so that mining will be the third pillar of the national industry based on the provision of natural resources estimated at 1.3 trillion dollars, in light of the increasing global demand for them, stressing that the Kingdom aims to increase the contribution of mining in GDP from $17 billion to $64 billion by 2030.

The minister added that the new mining investment system was issued, and the “electronic mining” platform was launched, pointing to the launch of the accelerated exploration initiative to conduct surveys and evaluate mineral sites, which will include more than 50 approved sites, in addition to starting the implementation of the initiative of the general geological survey project to cover 600,000 square kilometers in the Arabian Shield.

In a speech before the conference, Al-Khorayef addressed the conference participants, saying: We must adopt an international model that brings together multiple stakeholders to enhance cooperation and dialogue on the future of minerals.

Al-Khorayef explained that a comprehensive strategy for mining and manufacturing industries was launched in the Kingdom, which includes 42 initiatives aimed at raising the sector’s contribution to the domestic product and providing investment opportunities and jobs for citizens. “We have a great opportunity to contribute to the provision of vital minerals.”

It is noteworthy that the eighth consultative meeting of Arab ministers concerned with mineral resources affairs, prior to the conference, which was organized by the Saudi Ministry of Industry and Mineral Resources, in the presence of 32 ministers and government representatives and nine international organizations, and in partnership with the Arab Organization for Industry, Standardization and Mining, had discussed the achievements in implementing the recommendations Ministers, including what is related to the database of mining ores production in the Arab countries, the geological and mineral portal for the Arab countries, and Arab capacity building in the mining sector.