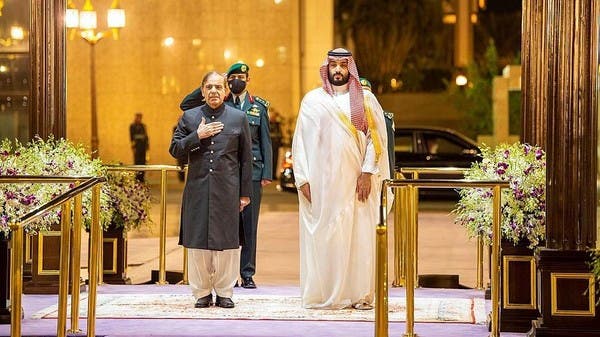 Prince Muhammad bin Salman bin Abdulaziz Al Saud, Crown Prince of Saudi Arabia and Deputy Prime Minister, held a session of official talks in Jeddah with Pakistani Prime Minister Muhammad Shahbaz Sharif, during which they reviewed the historical relations between the two countries and the close cooperation between the two countries in various fields, and they discussed Ways to strengthen relations in all fields.

On the political front, the two sides exchanged views on issues and issues of concern to the two countries on the regional and international arenas, and agreed on the importance of continuing to work to coordinate their positions to serve their interests. And to give priority to political solutions to conflicts in a way that brings prosperity and prosperity to the region and its people, according to a joint statement on Saturday.

A comprehensive political solution to the Yemeni crisis

The two sides also reaffirmed their support for the efforts made by the coalition forces to support legitimacy in Yemen, and the many initiatives aimed at reaching a comprehensive political solution to the Yemeni crisis in accordance with Security Council Resolution 2216, the Gulf Initiative and its executive mechanisms and the outcomes of the National Dialogue Conference.

The two sides also stressed the need for the international community to take measures to ensure the Houthis’ involvement in political consultations under the supervision of the United Nations to reach a final and comprehensive political solution.

In addition, the Kingdom of Saudi Arabia welcomed the Pakistani Prime Minister’s assertion of his country’s keenness to resolve all outstanding disputes with India, including the Jammu and Kashmir dispute.

The two sides also discussed the developments of the Palestinian cause, and stressed the importance of preserving the status of Al-Quds and the Islamic character of Al-Quds Al-Sharif among the Arab and Islamic nations, and achieving comprehensive and just peace in accordance with the relevant international legitimacy resolutions and the Arab Peace Initiative, in a manner that guarantees the right of the Palestinian people to establish their independent state on the 1967 borders. Its capital is East Jerusalem.

The situation in Afghanistan

The two sides also discussed the latest developments in Afghanistan, and agreed on the need to achieve security and stability and to prevent the use of Afghan territory as a haven for terrorist groups. They also agreed on the importance of following up and implementing the outcomes of the extraordinary meeting of the Council of Foreign Ministers of the OIC Member States on Afghanistan, aimed at supporting stability and providing humanitarian support to the Afghan people.

They also stressed the importance of respecting the rights guaranteed by Islamic Sharia, in order to achieve security and peace for Afghanistan, and the continuation of concerted international efforts to provide aid to the Afghan people.

They expressed their hope that the Russian and Ukrainian sides would reach a political solution that would end the crisis, achieve security and stability, and limit negative repercussions at the regional and international levels.

It is noteworthy that the Prime Minister of Pakistan, Muhammad Shahbaz Sharif, paid an official visit to the Kingdom of Saudi Arabia during the period from April 28 to 30 of the same month.